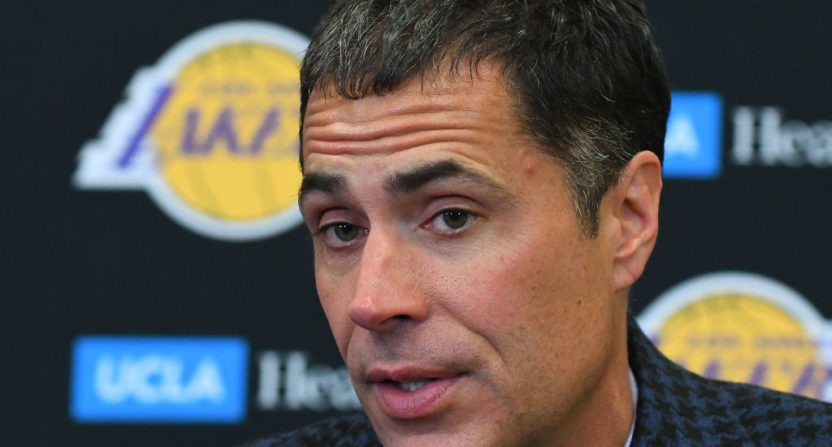 The Lakers are coming back strong. With a young core of point guard Lonzo Ball and wing Brandon Ingram, they may be just a few players away from actually contending in the West.

Fortunately, they’ve freed up some cap room to get such players, and general manager Rob Pelinka said on The Dan Patrick Show the franchise may shoot for two max contracts in free agency next year.

“Magic and I did a trade that allows us to have double max cap room for July 2018. With our platform, we’re really hopeful that we can add maybe a superstar or two to this young core to have the best of both worlds.”

The Lakers traded away Timofey Mosgov and D’Angelo Russell this offseason for Brook Lopez, who has one-year remaining on his contract. Now we may see them shop Luol Deng and Jordan Clarkson, who are making $18 million and $12.5 million respectively through 2020.

The first superstar for L.A. to target is obvious. The Lakers want Paul George, and as far as we know, Paul George wants to be a Laker. That could change if George finds a fit in Oklahoma City alongside Russell Westbrook, but all signs point toward George returning to his Southern California home.

For the second max contract, maybe LeBron James would consider a move out West. There are a few reasons James would not want to go to the Lakers, one of them being if he stays in the East his team will be favored to make the NBA Finals as long as he remains dominant. But the odds seem slim for James staying in Cleveland, as he’s been frustrated by the front office’s ineptitude this offseason. With Kyrie Irving recently demanding a trade, it seems one title is all the Cavs will get out of LeBron’s return.

Another name to keep an eye on is guard Avery Bradley, whom the Celtics recently traded to the Pistons. According to ESPN’s Adrian Wojnarowski, the Lakers aggressively pursued Bradley in trade talks this offseason. Bradley will be an unrestricted free agent next summer, and there’s little reason for him to stay with a Pistons franchise that has no direction. Adding the two-time All-NBA defender (who’s still only 26 years old even though it feels like he’s been around forever) could provide some balance in the backcourt alongside the offensively inclined Ball.