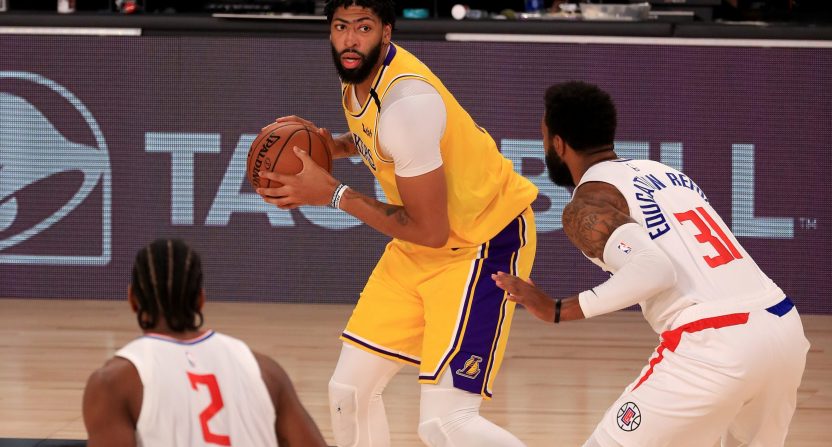 In a back-and-forth opening game on the NBA restart opening night, the Los Angeles Lakers managed a two-point win over the Los Angeles Clippers, tying the season series at 2-2. It was a well-played game overall, though LeBron James had a slow night and the Clippers were missing Sixth Man of the Year candidates Lou Williams and Montrezl Harrell.

These two teams appear about as evenly matched as can be. The Lakers proved they could beat a full-strength Clippers back in March. If the Clippers can come away with the West’s second seed (not a guarantee, with the Nuggets right on their tail), a battle of LA in the Western Conference Finals could prove one of the most exciting playoff series in recent memory.

The opportunity for LeBron to win a fourth championship is historically significant. A 4-6 Finals record with three different teams, and a championship after an MVP-caliber season at the age of 35, would add to arguably the greatest career the NBA has ever seen. Opinions of the LeBron-Michael Jordan debate could shift for some people.

For much of the season, however, it looked as though the Clippers had an edge on the Lakers, even as the Lakers dominated the West. The Clips held LeBron in check in the first two matchups. They thrive on a surplus of elite defending and dominant bench scoring. Kawhi Leonard and Paul George can reign threes and lock down any perimeter player in the league. Betting against the Clippers didn’t feel right, particularly once the playoffs arrived — a potential closing lineup of Leonard, Geoge, Williams, Harrell, and another player was too much for LeBron and Anthony Davis to handle.

There are no guarantees now. The Lakers held onto a lead in the March game, erasing some of the concerns that dogged them in prior matchups. Their lack of top-tier perimeter defending didn’t feel as detrimental once LeBron started defending Leonard full time. On offense, LeBron forced Williams off the court by attacking him on switches, robbing the Clippers of ball-handling and generating easy buckets away from the prying hands of the Klaw. The Lakers’ impressive win over the league-leading Bucks that same weekend increased confidence as well.

On Thursday night, LeBron didn’t have the luxury of attacking Williams, and without any sort of shooting touch, he went quiet offensively. But a troublesome issue arose for the Clippers: no one was able to stay in front of Davis. Avoiding foul trouble, Davis played 35 minutes and scored 34 points. He didn’t shoot particularly well — just 8-of-19, though he was 2-of-5 from three, a promising sign — but he shot 17 free throws and made 16 of them. The Clippers struggled to keep Davis from muscling into the lane.

Without Harrell, the Clippers tasked JaMychal Green, and Patrick Patterson with defending AD for most of the game, per NBA.com matchup stats. Marcus Morris — who along with Harrell most frequently defended Davis in March — spent parts of the game as the nominal center. The Clippers don’t appear to trust starting center Ivica Zubac to play big minutes in these games. Zubac played just 15 minutes, and he sat on the bench for most of the fourth quarter.

In their win on Christmas, Harrell, and Leonard were credited with most of the defensive possessions against Davis. There might be a lesson for Doc Rivers there.

Though AD had an easy time getting to the line, his shooting percentage was favorable for the Clippers, and he made just four of his eight shots at the rim. The Clippers found success when their rotations were crisp and one of their elite perimeter defenders, notably Leonard, provided help defense:

It’s a good sign for the Lakers that they survived on offense without a scorching night from LeBron. As usual, Leonard was sensational on defense, but LeBron finished with seven assists and facilitated the offense as he usually does, pushing the pace when appropriate and timing his passes exceptionally. He flung assists to all locations, and while the rust showed on a couple of wayward attempts, he hit on most:

Danny Green didn't make this, and it doesn't seem like a spectacular play, but that's because LeBron's passing genius and absurd vision have spoiled us for years.

Just masterful zip and precision to hit Green right in the chest. Really appreciate his fastballs to the corner pic.twitter.com/rYvnWKzExZ

Generating creative offense outside of the usual LeBron-centric actions and Davis face-ups is important for the Lakers. Using secondary offensive players helps take the Clippers’ elite defenders out of the picture, and neutralizes a Clippers advantage.

Kyle Kuzma played the role the Lakers want: handle the ball some when LeBron’s off the court, and play as a third fiddle in important fourth quarter minutes. He scored 16 points on four-of-eight shooting — seven of his attempts were threes — and added seven rebounds. His three-point shooting has been abysmal the last two years, at a consistent 30 percent after a promising rookie year, but he looked confident firing away on both catch-and-shoot opportunities and off the dribble. (He should focus on catch-and-shoot: he shot 35 percent on those attempts this year, sinking to just 16 percent on pull-ups.)

The Lakers may need more off-the-dribble bounce from Kuzma in the future, but 16 points of secondary scoring is something Frank Vogel could surely get used to. Dion Waiters, in his competitive Lakers debut, showed some off-the-dribble skill of his own. He scored 11 points despite a 1-for-6 three-point shooting night, taking the ball to the rim effectively and using screens to burrow into good areas:

This sort of creativity with the ball in his hands is a great asset for the Lakers to have. Rajon Rondo, while mediocre, is out, as is Avery Bradley. Waiters being more than LeBron’s pet catch-and-shoot specialist would help the Lakers, though they could certainly use that shooting ability as well.

Alex Caruso has proved his worth as a backup point guard. He’s a tenacious defender who won’t get steamrolled on most switches, and he came away with a crucial late steal against the Clippers. His offensive game is underrated; he knows his role, and he never does too much. If there’s a lane to the basket, he’ll take it (seven points against the Clips, plus a handful of free throws), but he won’t force shots or take the ball out of LeBron’s hands. He’s a crafty cutter who looks for give-and-go opportunities, making him a great fit with LeBron, who relishes good decision-making around him. Part of the reason the Lakers have thrived without an effective traditional point guard anywhere is Caruso’s craftiness.

The Lakers’ lack of elite perimeter defending has been mitigated by a rejuvenated LeBron on that end. He’s willingly taken on the Kawhi assignment and held his own, stopping him on a handful of possessions and coming up big on the last possession of the game. With AD affecting shots at the rim and Danny Green present as a solid stopper, the Lakers looked more versatile on defense. They switched often, and LeBron frequently directed traffic in a mobile, free-flowing scheme.

George’s shooting is difficult to stop, and Leonard will get his every night. Williams and Harrell attacking Lakers’ bench units adds another dynamic. But the Lakers’ defense is good enough to hang with the Clippers.

A playoff series will explore all of this in much deeper form, and introduce more variables. Hopefully we get to see it.