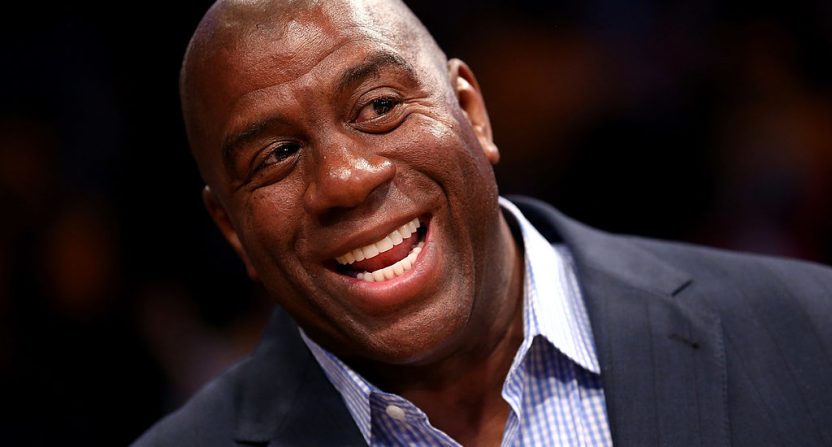 GM Mitch Kupchak has been relieved of his duties and Jim Buss will no longer be EVP of Basketball Operations. 2/2

TEAM SAYS! He got scooped!

Less than two weeks ago on February 10th, shortly after he was named a senior adviser to team co-owner Jeanie Buss, Magic said he wanted to call the shots.

“Working to call the shots, because it only works that way,’’ Johnson said. “Right now I’m advising. I get that. But at the end of the day, then we all got to come together and somebody’s got to say, ‘I’m making the final call,’ all right? And who’s that going to be?”

Now it’s going to be all on you, Magic.

Here is what Jeanie Buss and Magic said about the move in the team’s official release:

“Today I took a series of actions I believe will return the Lakers to the heights Dr. Jerry Buss demanded and our fans rightly expect,” Jeanie Buss said. “Effective immediately, Earvin Johnson will be in charge of all basketball operations and will report directly to me. Our search for a new General Manager to work with Earvin and Coach Luke Walton is well underway and we hope to announce a new General Manager in short order. Together, Earvin, Luke and our new General Manager will establish the foundation for the next generation of Los Angeles Lakers greatness.”

“It’s a dream come true to return to the Lakers as President of Basketball Operations working closely with Jeanie Buss and the Buss family,” said Earvin “Magic” Johnson. “Since 1979, I’ve been a part of the Laker Nation and I’m passionate about this organization. I will do everything I can to build a winning culture on and off the court. We have a great coach in Luke Walton and good young players. We will work tirelessly to return our Los Angeles Lakers to NBA champions.”

While Johnson now has a fancy new title with the team, as mentioned in the release, the team will be hiring a new General Manager.

As for Buss’ comments on Kupchak and his run as GM dating back to 2000?

“We are grateful for the many contributions Mitch has made to the Lakers over the years and we wish him all the best,” Buss said.

What about Jeanie’s thoughts on her brother, Jim?

“Jim loves the Lakers. Although he will no longer be responsible for basketball personnel decisions, he is an owner of this team and we share the same goal: returning the Lakers to the level of greatness our father demanded. Our fans deserve no less.”

So basically Jeanie threw out the Lakers’ 16-year GM and her brother. Then again, if she’s going to throw them out, Magic is about the only person it’s okay to replace them with.

At the end of the day, it’s a new Lakers organization led by part-owner of the cross-town Dodgers (and ESPN analyst, though it seems like he won’t be able to hold this new Lakers position and hang on to his role with the Worldwide Leader) Magic Johnson, and it all makes sense.

Naturally, Twitter is going crazy due to this big news.

Magic Johnson and Larry Bird can now negotiate trades against/with each other. Wrap your head around that.

when ur trying to reach magic johnson before the trade deadline pic.twitter.com/0WmvDJrle3

NBA general managers when they find out Magic Johnson is named the President of Basketball Operations pic.twitter.com/27r1mGG2zU

I will, again, point out that Magic Johnson admitted he was just learning the CBA 10 days ago. The Lakers’ next hires are VITALLY important.

Congrats to Magic Johnson, who, like many of my friends, has tweeted his way into a job he's probably not qualified for.

The Lake Show is slowly but surely making a comeback.