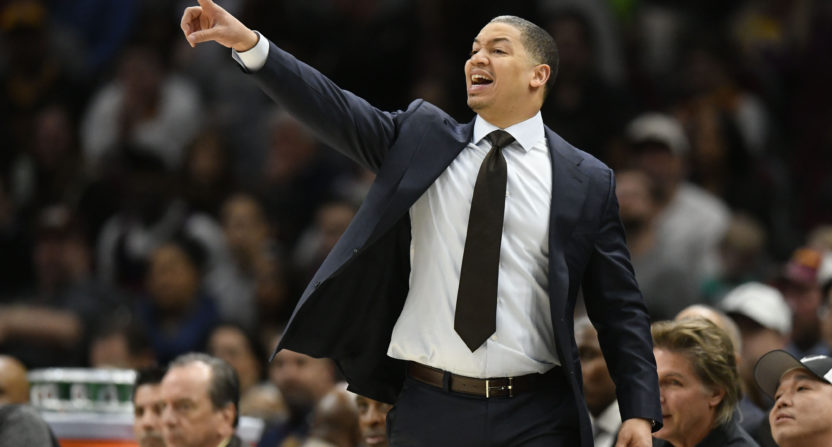 It’s been quite the week for the Los Angeles Lakers, especially with president of basketball operations Magic Johnson announcing his departure in a sudden press conference Tuesday before even telling owner Jeanie Buss he was leaving. Friday saw yet more drama still added to the mix, with the team “mutually parting ways” with head coach Luke Walton in a move that had been rumored for months, but with former Cleveland Cavaliers’ coach Ty Lue (seen above in 2018) quickly listed as the “strong front-runner” for the job. There had been a lot of previous talk about Lue coming in given his ties to LeBron James from Cleveland, where James reportedly played a major role in the ouster of David Blatt and the selection of Lue as his replacement. Here’s the announcement and some of the past Lue talk:

.@ClayTravis: Luke Walton won't be LA's coach next season. I don’t think Magic or Rob Pelinka has his back the way Pat Riley had Erik Spoelstra’s@Chris_Broussard: I agree… Keep your eyes on Ty Lue, Mark Jackson and Jason Kidd pic.twitter.com/iToCtOJVr0

Who will be @Lakers HC for Game 1 next season?

Via @stephenasmith “Let’s call it what it is, Luke Walton is done. I think this will be his last season in LA. Everybody knows Lebron would prefer Ty Lue was the new coach of LAL. That’s the name I’ve been hearing, I don’t think Magic Johnson will bring him on board” #Lakers

James and Lue won the 2016 NBA title together and made the NBA finals the next two years, but Lue took plenty of criticism during that tenure as well, and he was fired in Cleveland after the Cavs started this season 0-6 following James’ departure. (They’d go on to finish 19-63, though, so it’s not like they improved much after axing him.) We’ll see if he winds up with the Lakers.

At any rate, whoever the new coach is there has some messes to deal with. Friday also saw a report from Shams Charania of The Athletic (later confirmed by ESPN’s Tania Ganguli) that Lakers’ guard Lonzo Ball almost had unauthorized surgery in February at the prompting of former business partner and Big Baller Brand co-owner Alan Foster, who Lonzo’s since cut ties with over a missing $1.5 million and is now suing for $2 million. Here’s more from Charania’s piece, which is a larger discussion of all the issues the Lakers had under Johnson:

One of the headaches and near-debacles of the final stretch of Johnson’s tenure came in late February. In what could have been a catastrophe, the Lakers needed to prevent point guard Lonzo Ball from undergoing a potential unauthorized surgery on his left ankle that was planned by estranged former business partner Alan Foster and with LaVar Ball’s knowledge, multiple team and league sources told The Athletic.

Lonzo Ball traveled to Ohio in late February to potentially go through with a procedure on his injured ankle, pushed by Foster, a source familiar with the situation told The Athletic. The family had experience with the doctor who would perform the procedure as he had also operated on LiAngelo Ball, the source said.

That piece then mentions that the Lakers only found out about it when Ball called GM Rob Pelinka, and Pelinka worked with Johnson to inform Ball that unauthorized surgery would void his contract and managed to convince him (in conjunction with his then-agent Harrison Gaines) to return to Los Angeles. But the No.2 overall draft pick in 2017 just peacing out to have surprise surgery with a doctor his family likes, and only being stopped when he’s told it would void his contract, doesn’t exactly paint a picture of a highly-functional organization. What a world. “Next time, on Days of our Lakers…”