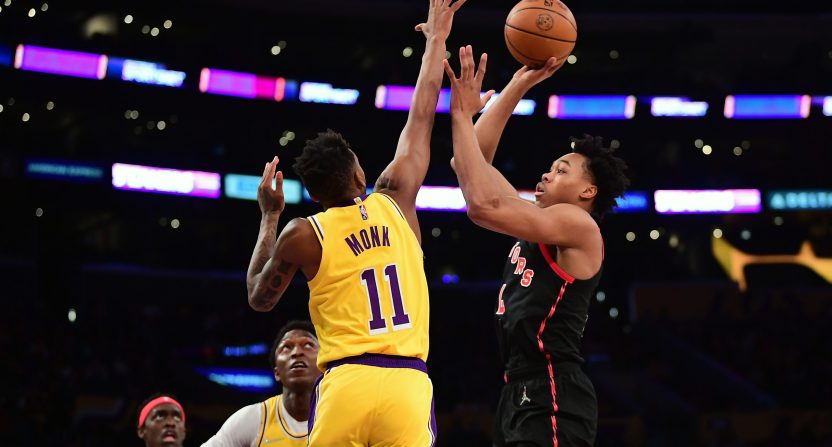 One quarter into Monday’s game against the Toronto Raptors, it’s fair to say that things aren’t going swimmingly for the Los Angeles Lakers.

In fact, only one quarter into the game, the Lakers were left staring at a deficit of more than 20 points.

Things have been rough for the Lakers in recent weeks, and given the starpower on the team, NBA fans normally have strong reactions when things don’t go well.

Monday was no different.

Raptors up 19-2 versus Lakers. Just stop the game now

The Lakers have a whole TWO points halfway through the 1st quarter 💀 pic.twitter.com/7BhsTloEaU

As bad as you might feel about things right now, Jazz fans, at least you're not the Lakers 🤷‍♂️ pic.twitter.com/b454AjfLKp

Bro bout to fake some chest pains at halftime and bounce lol he ain't trying to be around for this😂 https://t.co/73jwQRvmAU pic.twitter.com/4txQiwGQLv

Bad games happen and bad quarters definitely happen. But the Lakers did something on Monday that had never happened in the near 43 full seasons that have taken place since the NBA added the three-point line.

Yesterday, the Lakers allowed 48 points in the 1st quarter, their most allowed in a 1st quarter in the shot-clock era (since 1954-55).

But the Lakers fan base were told they signed 3-point shooters pic.twitter.com/rFjAdir8kN

And in the interest of fairness, things weren’t going any better for Los Angeles in the low post.

Raptors have a 33-12 first-quarter lead over the Lakers. Scottie Barnes (15 points) has outscored the Lakers, which have shot 3-of-25 from the field and 0-of-13 from deep. That's not all. Raptors have had 18 points in the paint.

The good news is, in the second quarter, the Lakers finally made a three-point shot.

Los Angeles entered Monday’s game 9-19 since January 9. On that day, the Lakers lost a game to snap a four-game winning streak, which had moved them to 21-19 on the season.

There have been some positive moments since, such as a win over the Golden State Warriors and another against the Washington Wizards. But judging by the surrounding moments, those were just a small oasis in a big desert.

Barring something dramatic, it’s going to be awfully hard to put a positive spin on this game.