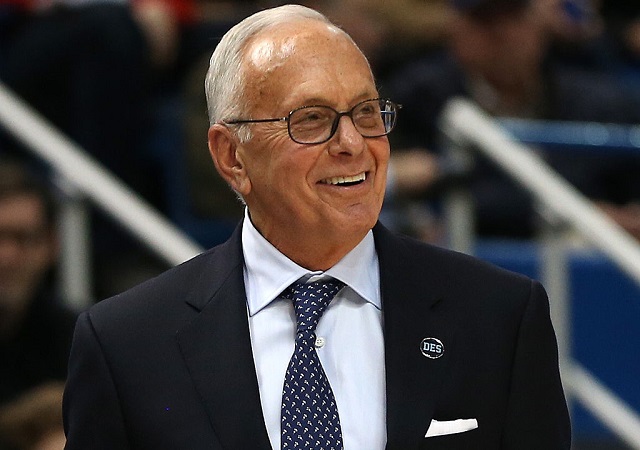 The Philadelphia 76ers have gone from trying to be bad to plain old just bad, this after two years of tanking to gain some of the top talent in the NBA Draft lottery. However, this season has not exactly gone as planned, with the team sitting at an association-worst 1-25.

Drastic times call for drastic measures, and the first of those measures came in the hiring of veteran executive Jerry Colangelo. However, former Sixers head coach Larry Brown apparently sees another couple of moves needed to get this team back to its winning roots. Brown suggests himself, naturally, as the team’s general manager. But he also thinks Allen Iverson should be brought in for a front-office role.

Never mind that Brown is currently the head coach of the SMU Mustangs. The mercenary head coach believes the only cure to what ails the Sixers is to go back to the glory days of the late 1990s and early 2000s.

Brown, who coached Philadelphia from 1997 to 2003, is apparently peeved at what is happening with his former team, even if he is watching from Dallas these days.

“I’m sick of what’s going on there,” Brown said to Jon Marks of Sheridan Hoops. “You know I care about the Sixers. It’s an unbelievable basketball city and I had a great experience there. I don’t want to get on them when they’re struggling, but they don’t have any veteran leadership. I want to help. I could straighten it out in five minutes. I wish they’d get Allen involved. All those young kids worship him.”

Really? All those young kids worship him?

More like all those young kids were barely old enough to follow basketball the last time Iverson was relevant. Sure, his NBA career technically ended in 2010, but his most productive time ended about the same time has his first stint with the team did — in 2006.

Iverson was a polarizing figure back in the day, as one of the best on-court players the league has ever seen. But he also couldn’t get along with coaches or others very well. After all, there was the famous “practice” moment, along with other clashes with Brown and other coaches throughout his career in Philadelphia.

Still, he was one of the most competitive players during his day, playing such a physical style of basketball despite his diminutive stature. It’s something the young kids on the Sixers roster could stand to learn and Iverson would be a perfect person to instill that attitude with them.

He also has the chops as a scoring king and is one of the best defensive players in franchise history. Iverson is tied with Wilt Chamberlain for the franchise record for career points per game (27.6) and with Maurice Cheeks in steals per game (2.3).

Lest you think we’re kidding you about the tanking over the past few years, current GM Sam Hinkie spent most of his first three years trading away veteran contracts that were killing the Sixers against the salary cap and adding young talent.

Those players are now in their second and third years for the most part, and some of the young draft picks haven’t exactly panned out due to injury or simply missing.

Hinkie’s first draft in 2013 gave them Michael Carter-Williams, who is now plying his trade with the Milwaukee Bucks. The 2014 draft yielded big man Joel Embiid, who has spent his entire career hurt and has yet to play a game for the Sixers.

Jahlil Okafor was the lottery pick this past season, and he’s already begun a downward spiral off the court that puts in danger his ability to meaningfully contribute to the team.

Missing on those key draft picks while also attempting to go young is a recipe for disaster.

Would bringing back the glory days duo of Larry Brown and Allen Iverson right the ship? With a roster full of dead contracts and missed draft picks, the former coach and player would certainly have their work cut out for them.

The reality is, there is no magic pill that will cure what is happening with the Sixers right now. Colangelo’s hire is more about getting it right over the long haul, and this season is already lost.