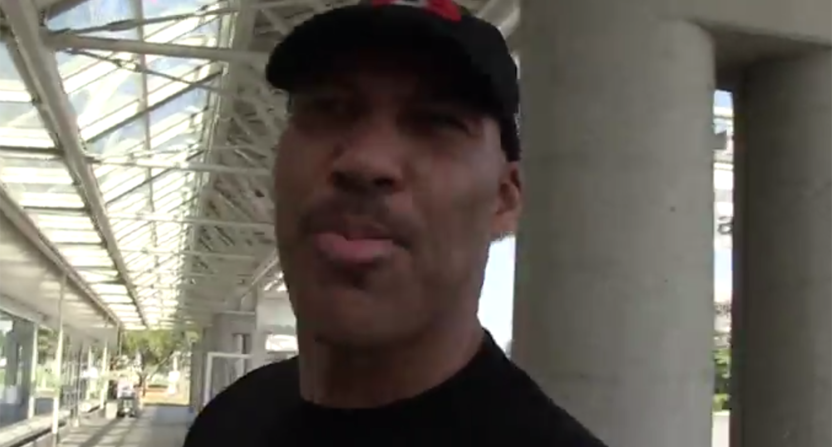 Adam Silver was wrong. LaVar Ball will not fade into the background now that his son Lonzo has been drafted by the Lakers.

But for once, LaVar’s latest fracas is not one he started. This one is on 76ers center Joel Embiid, who took a shot at the Balls on draft night. LaVar could have let Embiid’s tweet go, the same way he shrugs off most of his critics. But as you may have noticed, Ball loves his sons more than anything—even a spotlight. And Embiid’s tweet suggested humiliating Lonzo.

Please dunk on him so hard that his daddy runs on the court to save him.. https://t.co/cMvt5RYiSQ

And now that conflict has escalated. First, Ball responded by saying Embiid shouldn’t talk trash until he learns to stay on the court. (Embiid was having an historic rookie season until another injury cut it short after just 31 games.) Embiid responded with by saying “Fuck LaVar Ball” in a live Instagram video.

Anyone who’s followed LaVar’s dominance of sports media knew he would fire back. Remember when he blamed UCLA’s Sweet 16 defeat on slow white guys, tried to profit off his own sexist comments, and took a personal shot at Cavs guard Kyrie Irving and his deceased mother?

Sure enough, LaVar took the beef further on Friday when Ball told TMZ Sports that Embiid’s comeback was lazy and unintelligent.

“The reason he said that — he’ got three words. His vocabulary is limited. You gotta use cuss words when you don’t have no intellect. He’s not intelligent at all. He’s worried about me? He should be worried about playing.

The reporter then asked what will happen when the Lakers play the Sixers next season. LaVar quipped:

“Guess what. He won’t even be on the court probably. Another injury or something. Always plagued. … I’ll be in attendance, but I’m not gonna worry about him. It’s small change.”

It’s unquestionably harsh that Ball made fun of Embiid’s vocabulary, considering Embiid is a Cameroon native who’s been speaking English for about five years. I can’t get inside LaVar’s mind, but I’d guess that extra nuance in his insult came more from ignorance than malice.

The injury comments are also harsh but more warranted. No matter how special Embiid’s shortened rookie season was, the fact is he’s still a nobody in the grander picture of the NBA. Embiid has been in the league for three years yet played only 31 more professional games than Lonzo.

Most of the sports world hates LaVar. Nike executive George Raveling even called him the “worst thing to happen to basketball in the last hundred years.” There’s plenty of reasons to dislike him, but don’t add this latest round of insults to your list, as many people already have.

LaVar Ball may seem dumb, but he’s made a name for himself through all these controversies. According to Lakers president Magic Johnson, he even admitted it’s all been part of a master marketing plan, as we all suspected. He’s been milking the publicity the whole time, even appearing on WWE Raw after the NBA draft and somehow still acting more absurd than everyone else around him in a professional wrestling arena.

So if you’re going to take a shot at LaVar and his family like Embiid did, you should expect this absurdity in return. Sorry, Embiid, but Ball is becoming a sports-feud king.