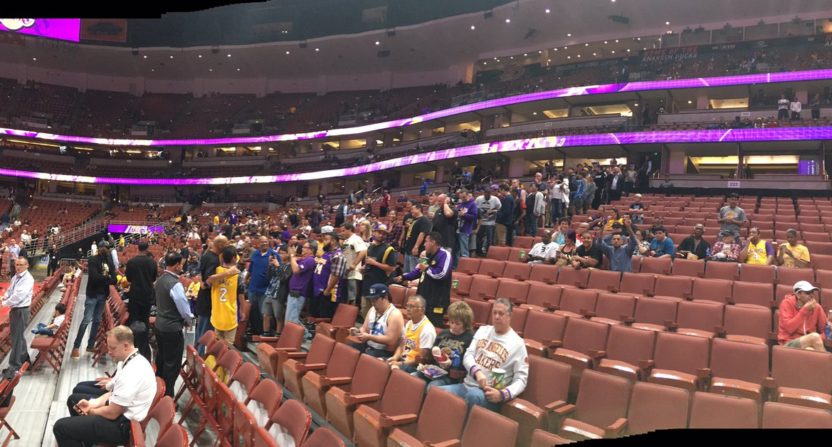 The Los Angeles Lakers opened up their preseason schedule at home Friday night, giving fans a chance to line up and see the new biggest star in town up close and personal for the first time. After that, they could then watch his son play an exhibition basketball game for the Lakers.

It appeared that LaVar Ball was as big an attraction in the stands as his son was on the court. Prior to the game, fans literally lined up in the aisle just for a chance to shake hands, receive an autograph from, and maybe take a picture or two with LaVar, the chief big baller of the Ball family.

Parents of star athletes have always been able to draw some attention from fans, but LaVar Ball has changed the game by emerging as a celebrity in his own right over the last year or so. The outspoken father of Lonzo has long been making claims about how he and his sons were going to take the basketball world by storm, and whether you choose to admit it or not, it seems everything is going according to plan for the Ball’s.

LaVar is quite the controversial figure, of course. He plays by his own rules and takes his ball home with him when things don’t go his way. He has disrespected women like Kristine Leahy of FOX Sports 1, been shown to be a vocally abusive amateur basketball coach who will take his team off the court if he doesn’t like a call made by a female ref. The misogynist mindset of Ball has led to plenty of criticisms about him, and deservingly so, but so far Ball does not seem to have been hurt by his antics.

Make no mistake about it, when the Lakers drafted Lonzo Ball with the second overall pick in the NBA Draft this summer, they were also drafting LaVar Ball and all the baggage that came with it. Maybe he will end up being just another celebrity in the crowd at Staples Center, but there is no doubt any decision to draft Lonzo had to be accompanied by a discussion of what to expect and how to respond to what LaVar does and says in the future, because LaVar will say or do something that will raise an eyebrow or two around the Lakers organization at some point. It is inevitable given his track record. As long as Lonzo is balling, then everything will be just fine in LA for the Lakers.

LaVar really has a line of people waiting to meet him

Coming off an MVP performance in the NBA summer league, Lonzo appears to be in good shape in the early stages of the NBA’s preseason. He still has areas of his game that need to improve in order to shine in the NBA, but every rookie playing his second NBA preseason game can have the same said about them. A scouting report from Ball’s preseason performances so far have suggested he needs to be more aggressive and he needs to work on his shooting fundamentals. But give it time before even thinking about calling Ball a bust. However, if Lonzo continues to show these struggles throughout his rookie season, then things could turn ugly in a hurry.

The tolerance for any criticisms from LaVar Ball about how the Lakers are being coached or managed would make for some tension within the Lakers family, but the Lakers had to know they were signing up for that possibility. No matter how optimistic a team will be about their high draft picks, any well-run organization will look at all of the possible negatives. Having the father of the new star player mouthing off in front of any camera or microphone that will constantly be shoved in his face every night has to be something the Lakers admitted could be a possibility.

And it may have already gotten started. LaVar Ball has already drawn a line for Lakers legend and team president Magic Johnson.

“[Magic is] not going to have no problems with what I do because he can’t tell me what to do,” Ball said, according to SoCal News Group. “You worry about Lonzo.”

Johnson is publicly agreeing with that stance for now, as should be expected. But if things go awry and fans are put in the position of having to choose sides, will they fall in line with their newest celebrity father or the icon that was the star of the original “Showtime” Lakers?

As Lonzo Ball gets set to begin his promising NBA career, LaVar is already coming up with his own plan of attack to turn his youngest son, LaMelo Ball, into the next basketball prodigy. That plan will include pulling LaMelo out of high school and homeschooling him and keeping the focus on basketball. This sounds like a form of child abuse to me, but nonetheless, this is how things are in the Ball family. Basketball comes first, second, and third, and you can stay in yo’ lane if you think otherwise.

Stunning news: LaVar Ball said he is pulling junior LaMelo from Chino Hills and will home-school him the next two years and train him.

While this will come off as shocking news that really isn’t all that shocking, it is worth reminding you this is not exactly an unprecedented parenting move. Bryce Harper, the franchise player of the Washington Nationals, once went through a similar experience to pursue a career in baseball.

Bryce Harper's parents pulled him out of school after 10th grade. Earned GED and the a year of JUCO

Baseball might be slightly different in that players can be drafted at such a young age and jump right into the farm system if they choose to pursue professional baseball that early. Harper came out of high school after his sophomore year to work on his GED and he played one year of college baseball at a junior college for one season before he was taken with the No. 1 pick of the 2010 MLB draft by the Nationals. And he turned out to be an MVP and five-time All-Star.

But the question is whether or not LaMelo Ball is going to be the NBA’s answer to Bryce Harper. As far as LaVar Ball is concerned, his sons may just be worth five Bryce Harpers. Time will tell, but for now Big Ballers will focus on just being the biggest ballers they can possibly be. And that means playing basketball the big baller way without having to take instruction from any coach who focuses on team basketball.

Just spoke to LaVar Ball on why he's pulling his youngest son out of HS and home schooling him. pic.twitter.com/nvUprIJnew

LaVar Ball is the new biggest show in Los Angeles on the basketball scene, and the new “Showtime” is just getting warmed up.

1 thought on “LaVar Ball is the new “Showtime” Lakers experience”