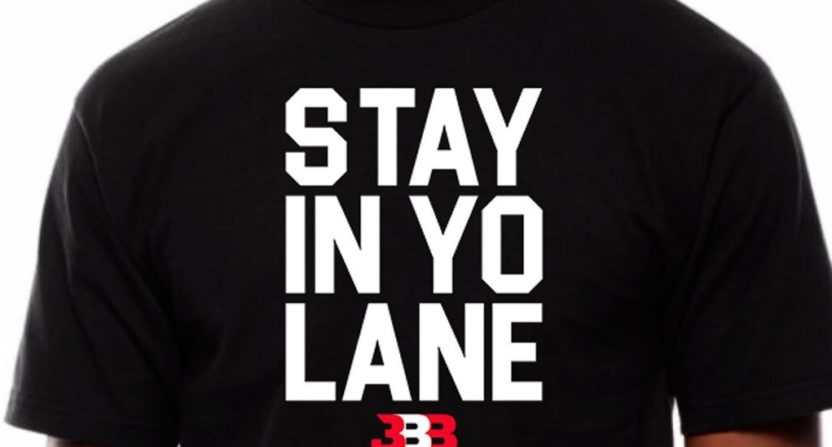 Let me get this right off my chest: I am not a fan of LaVar Ball. As a result, I will not be buying Ball’s newest shirt that sports his own sexist catch phrase.

Feast your eyes on this terrible shirt:

"STAY IN YO LANE!" Go to https://t.co/hqvuv4wISG to purchase pic.twitter.com/kmEEG3eTwd

Now feast your eyes on our own Andrew Bucholtz throwing shade at LaVar:

Trying to cash in on your own poor behaviour? Now that's a Big Baller Move. https://t.co/UjrBrGHJNX

Quick story: when I told my roommate about this shirt and showed him a picture he paused for 5 seconds and then changed the subject of our conversation without saying anything, an example of “there are no words” in action.

But at least it’s a bad shirt sporting a sexist phrase that you can buy for your girlfriend too!

Seriously though this is a terrible shirt because it just spreads awareness for a terrible catch phrase that had so much sexism in its original use. Here’s an excerpt from Andrew’s piece over at Awful Announcing on the terrible phrase’s origin:

Colin Cowherd’s interview with LaVar Ball on The Herd Wednesday made for exceptionally uncomfortable TV, with Ball clashing with co-host Kristine Leahy and telling her to “stay in her lane” and then making multiple jokes about Jason Whitlock’s weight. It also was the best possible outcome for Fox and FS1.

Fox has been trotting out Ball across their platforms on countless occasions, with his desire to hawk his $495 shoes meshing perfectly with their desire for controversial, opinion-provoking moments that will get people talking about FS1. Here, they got a really memorable moment from Ball, one that got much of Twitter erupting with takes on a little-watched show on a little-watched network, and one that will be discussed ad nauseam across FS1 and elsewhere in the next few days.

The fact that LaVar did this isn’t at all surprising seeing as he basically only cares about himself, or so it seems. Naturally, he’s getting ripped for his decision to make the shirt:

@Lavarbigballer You are a moron.

@Lavarbigballer @Mr_1713 I got my BBB slipper in the mail today pic.twitter.com/s149vLFEGz

There were many more I could’ve included, but nothing beats the Bed Bath & Beyond one. (Which Dustin deleted, for some reason! It was so good!)