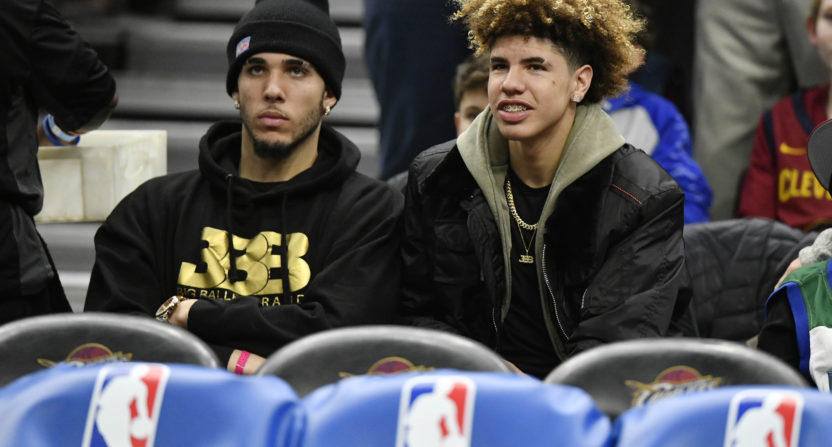 The Ball family (or most of it, at least) is on the ground in Lithuania, and they have brought their entire circus with them.

On Friday, LiAngelo and LaMelo Ball held an introductory press conference to welcome them to Vytautas Prienai, but their father LaVar made clear they won’t be there too long. Asked by a fan in Lakers gear when he can expect LiAngelo, LaMelo, and Lonzo to play together in Los Angeles, the puppet master parent considered his youngest son’s age and declared it would happen by 2020.

LaVar makes it clear: All three Ball brothers will be on the Lakers by 2020 ? pic.twitter.com/vKYWvBReQX

Of course, a reunion of the three Ball children with the Lakers is wildly far-fetched. LiAngelo is not expected to be drafted or signed when he becomes eligible for the NBA this spring, and although LaMelo has a shot at reaching the league one day, it will be tough to direct him toward one team in particular. LaVar was able to “speak it into existence” when it came to Lonzo, but he won’t likely be that lucky again.

But somehow, LaVar’s proclamation was not even the oddest event of the day in Ball-land. At the end of the brothers’ press conference, LiAngelo was confronted with a surprising inquiry: “Do you have a girlfriend?” It’s unclear whether the questioner was a reporter or a random fan or what, but LiAngelo responded to her flirtation pretty much how you’d expect a 20-year-old to respond in that situation. He smiled awkwardly, said he “just came here to play,” trailed off and eventually offered a “no comment.”

Note 16-year-old LaMelo melting into his seat out of second-hand embarrassment.

LiAngelo and LaMelo are expected to debut with Vytautas Prienai next week. Maybe once they resume playing basketball all the other stuff will fall away? Don’t bet on it.