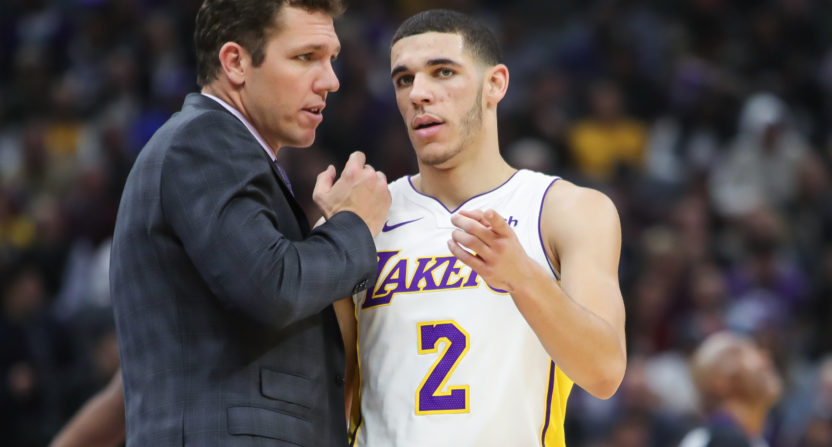 Lonzo Ball has been forced to answer for his father’s bluster for more than a year now, but never has the young point guard faced a situation as precarious as the one he faced Sunday.

On Sunday morning, ESPN published pieces of an interview with LaVar Ball, in which the bombastic basketball dad said that Los Angeles Lakers coach Luke Walton had lost his team.

“You can see they’re not playing for Luke no more,” Ball said from a spa resort in Birstonas, where he is staying while his two youngest sons, LiAngelo and LaMelo, get ready to make their professional debuts with Lithuanian team Prienu Vytautas. “Luke doesn’t have control of the team no more. They don’t want to play for him.”

LaVar has a history of this kind of thing, having pulled 16-year-old LaMelo out of high school over a dispute with his coach. This time, however, he has taken his opposition to the next level, undermining the credibility of an NBA coach from a position of little leverage. If LaVar dares the Lakers to choose between Lonzo and Walton, it’s possible he wouldn’t like their answer.

Questioned about his dad’s comments Sunday, Lonzo generally said the right things. He reiterated that LaVar will “speak his mind” and isn’t going to change, said his father was a “grown man” and insisted the latest circus would not affect his game. Asked whether he was happy with Luke Walton as his coach, Lonzo replied “I’ll play for anybody.”

Lonzo Ball on whether he is happy with Luke Walton as Lakers head coach: “I’ll play for anybody.” pic.twitter.com/9mSQFmReQo

But even as Lonzo plays cool in front of the cameras, there’s no question LaVar is putting him in a difficult position. The 20-year-old has to show up to the gym every day and work with a coach who has real reason to wonder about his allegiances. This would be tough enough if Lonzo were a star player, but for now he’s a sputtering rookie. Can he approach the coaching staff for advice while they think he’s forcing them out? Can he campaign for more playing time or larger role while Walton worries that LaVar wants him out? Rookies, particularly ones with troublesome flaws, are supposed to keep quiet and play. Lonzo, through limited fault of his own, finds himself in a deeply political quasi-power struggle with the man largely responsible for his NBA future.

On Sunday, Lonzo was essentially asked to choose between his father and his coach. He walked the tight rope effectively, but even so, that’s a decision no young player should have to make.