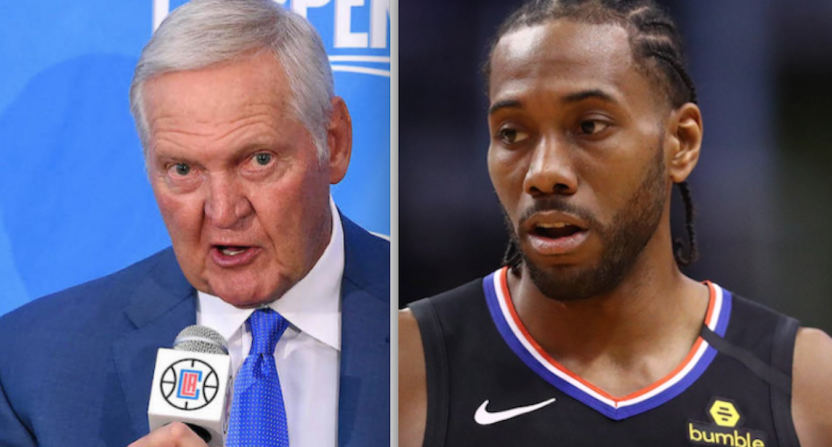 Did the Los Angeles Clippers commit tampering in an effort to gain an advantage in pursuing free agent Kawhi Leonard during the 2019 NBA offseason?

That’s the allegation in a lawsuit filed by someone claiming to be close to Leonard and best friends with the star player’s uncle. As reported by the New York Times‘ Marc Stein and The Athletic’s Sam Amick, the NBA is now investigating the accusations made by Johnny Wilkes.

In the lawsuit against the Clippers and consultant Jerry West, Wilkes contends that he is owed $2.5 million promised in an oral agreement for helping the team to successfully sign Leonard in free agency. The lawsuit was obtained by TMZ, which explained that Wilkes approached West and said he could convince Leonard to sign with the Clippers. But he’d only do it if the team paid him nearly $3 million, which Wilkes claims West agreed to do.

TMZ then followed up with audio from a voicemail message allegedly left by West in which he thanks Wilkes for his help, but hears that the Lakers front office strongly feels they’ll sign Leonard. And West can’t believe Leonard would go to the other, more famous NBA team in Los Angeles.

“I just find it hard to believe that he would want to go to that shit show,” the man said in the voicemail, “where he would not even be… wouldn’t even get his name in the paper and he wouldn’t be the face of the franchise, that’s for sure.”

Even if West is the man speaking in the voicemail, this isn’t damning evidence. He doesn’t talk about the money that Wilkes is alleging that he’s owed, nor is Leonard mentioned specifically by name. Referring to the Lakers as a “shitshow” is certainly amusing, however, coming from West — if it’s really him.

As ESPN’s First Take reminded viewers on Friday, Stephen A. Smith passed along rumors that Leonard’s uncle, Dennis Robertson, was looking for compensation (“houses, planes, sponsorships…”) in return for steering his nephew to a team. But Smith didn’t mention Wilkes or a multi-million dollar payment. Nor were any details of the recommendations Wilkes supposedly gave to the Clippers, such as trading for Paul George and pitching Leonard on what the team could offer beyond basketball.

Through a representative, West told TMZ that he wasn’t aware of any lawsuit and denied “any improper conduct in connection with the signing of Kawhi Leonard.” And after the Clippers’ preseason game versus the Utah Jazz on Thursday, Leonard said (via ESPN) that Wilkes was no influence on his decision to sign with the team.