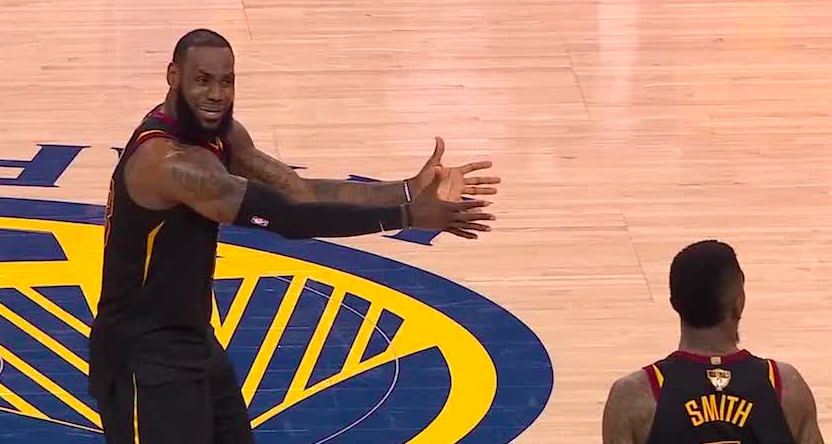 The Cleveland Cavaliers were given no chance against the Golden State Warriors in their unprecedented fourth consecutive championship meeting, and this year’s matchup seemingly lacked the drama and intrigue of the previous three. With a short-handed, cobbled-together Cleveland roster and the Warriors still boasting one of the greatest lineups ever assembled, the only question entering the series was how many games it would take Golden State to take a 3-1 lead over the Cavaliers in Finals victories.

But a funny thing happened when Game 1 tipped off. The Cavs were actually competitive. In fact, they were better than competitive. At one point during the second quarter Cleveland had an 11-point advantage. LeBron James had 24 points on an absurd 9-11 from the field and the Cavs as a whole shot 52% from the field.

Everything went right for the Cavs in the first half. And they were still tied 56-56 with the Warriors after Steph Curry’s 30+ foot buzzer beater. It was as good as the Cavaliers have looked maybe all season. And they couldn’t even have the lead at half.

That’s when the Warriors came out in the third quarter and went on one of their trademark runs. Just when it looked like the game was slipping away, James helped Cleveland to stick around with clutch basket after clutch basket. He even had them improbably in the lead in the last minute, 104-102, with a three point play.

Alas, that’s the moment that things stopped going right for the Cavaliers. First it was the controversial reversal of a block/charge call that James at least temporarily drew on Kevin Durant. Then it was Kevin Love giving up a three-point play to Steph Curry to put Cleveland down by a point. Next was George Hill missing a free throw that would have given the Cavs the lead with 4 seconds left. Finally, the inexplicable climax of J.R. Smith dribbling out the clock for overtime after rebounding Hill’s miss instead of going up for the winning layup. It was a gaffe that should live alongside The Drive and The Fumble and Tony Fernandez’s error in Cleveland sports infamy. It was that bad.

The look on James’ face afterwards said it all. He had played as close to the perfect game as you could play. And it still wasn’t enough. For as good as James’ teammates were for 47 minutes on Thursday night, they unfortunately let the King down when it mattered the most. The outcome in overtime was never in question as the Warriors would go on to win easily in the extra frame by a score of 122-114. James was only the sixth player in NBA Finals history to score 50+ points, and the first one to lose.

The Cavs were so close to stealing Game 1, but now it seems like their hopes of winning are further away than ever before. Perhaps Cleveland can draw inspiration from defying all the experts and coming so close in Game 1. But there are no moral victories when you’re playing for a championship. And James’ 51 points were ultimately in vain.

This is why it’s impossible to put James’ place in the history books solely on his Finals record or the number of rings he’s won. There’s no analogous situation to one player trying to overcome an entire team of All-Stars by himself. James is like Thanos trying to take on the entire group of Avengers, except instead of Infinity Stones, he has J.R. Smith’s basketball IQ and Tristan Thompson’s drama with the Kardashians.

Somehow even in defeat, James’ legend will grow after Game 1. But unfortunately for the Cavs, it won’t be good enough on its own to get them another championship.