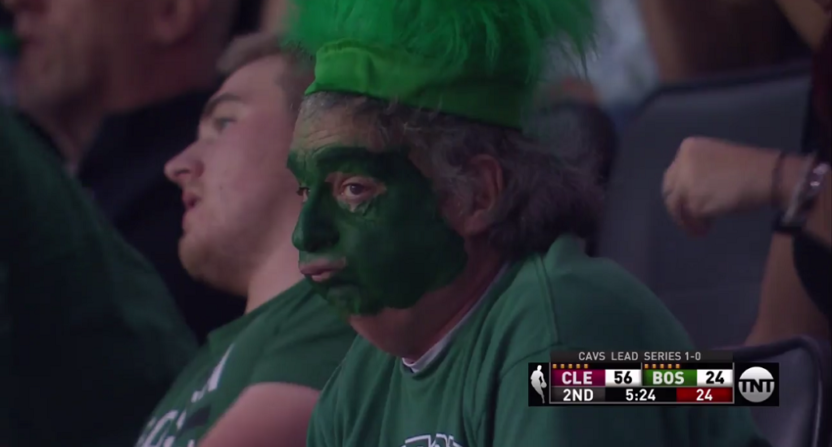 Apparently LeBron James was serious with his “I didn’t feel all that great” comments after Game 1 of the Eastern Conference Finals (despite scoring 38 points in a 117-104 Cavs win over the Celtics).

LeBron is on another level in Game 2, with 22 points (9-of-14 shooting from the field), six assists, three rebounds, three blocks, and two steals.  He’s led the Cavs to a 72-31 halftime lead in Boston. Yes, 72-31, on the road. 41 POINTS! That’s the largest halftime lead in NBA playoff history!

Cavs 41-point halftime lead is the largest in NBA playoff history. Previous high was 40 points by Pistons over Bullets in 1987.

Check out some of LeBron’s ridiculous plays from the first half:

Ignore that the shot was missed… this LeBron pass is absolutely ridiculous https://t.co/zF3Ip4zvP4

Celtics fans are not having an enjoyable time (and this is why you should never face paint):

And the Cleveland set the record for largest halftime lead on this hilarious J.R. Smith buzzer-beater to summarize how things went in the half:

Can we just start the NBA Finals already?

UPDATE: The rest of the game didn’t go much better for the Celtics.

Isaiah Thomas out the rest of the game with a strained right hip, per Celtics.

The Celtics' 44-point loss is the largest margin of defeat for a No. 1 seed in NBA playoff history.