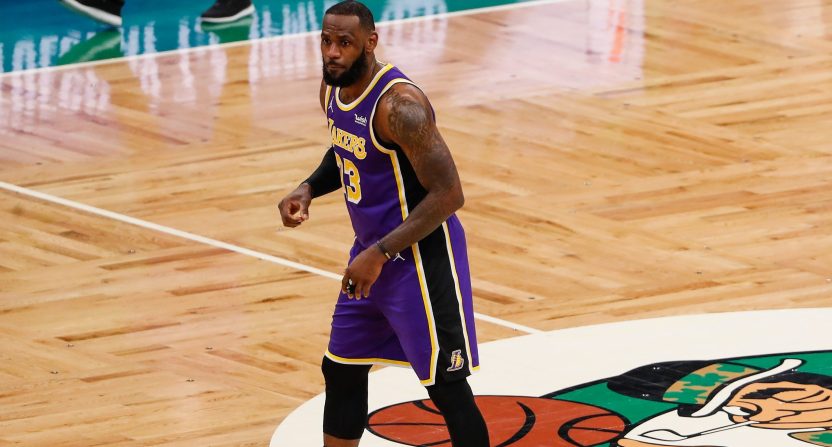 On the latest episode of HBO’s The Shop, Los Angeles Lakers star LeBron James was asked, “Why do you hate Boston?”

The question came after James said he hated playing in Boston the most among NBA cities.

James was quite honest with his response about why he hates Boston Celtics fans: “Because they racist as f*ck.”

LeBron was asked what city he hates playing in the most:

“Boston… because Celtics fans are racist as f*ck.”

Here’s the transcript of James’ exchange with Maverick Carter — James’ business manager — and Paul Rivera (co-creator of The Shop):

Rivera: “Why do you hate Boston?”

James: “Because they racist as f*ck, that’s why. They will say anything, and it’s fine. I mean, f*ck, it’s my wife, she’s been dealing with them her whole life. I don’t mind it. Like, I hear it… like, if I hear somebody like close by, I check them real quick. I move onto the game, whatever the f*ck. They going to say whatever the f*ck they want to say. They might throw something. I mean, I got a beer thrown on me leaving a game.”

Carter: “It’s the only place in the NBA where you and they have shirts and they say like ‘F*ck LeBron.'”

James: “Yeah, it’s like a ‘F*ck LBJ’ t-shirt. I believe they probably sold it at the f*cking team shop.”

The comments are even more eye-opening when considering that James is a partial owner of the Boston Red Sox.

This comes just weeks after the Golden State Warriors and Draymond Green’s wife Hazel Renee criticized Celtics fans for profane chants directed at Green — as well as using profane language to him in front of his kids — during the NBA Finals in Boston.

There have been a number of such complaints about Boston fans from professional athletes over the years.

For example, former major-league star Torii Hunter said in 2020 that he has “been called the N-word in Boston a hundred times,” and he made sure to put a no-trade clause in his contract so that he wouldn’t be dealt to the Red Sox.

“I’ve been called the N-word in Boston a hundred times,” Hunter, who played 19 seasons between three organizations, revealed. “And I said something about it. [People will say], ‘Oh, he’s just a militant, he’s lying, this didn’t happen.’ No, it happened. All the time. From little kids. And grown-ups right next to them didn’t say anything.”

Hunter’s comments even led the Red Sox to issue a statement in June of 2020, with the statement saying that “Torii Hunter’s experience is real” and noting that “there were 7 reported incidents [in 2019] at Fenway Park where fans used racial slurs.”