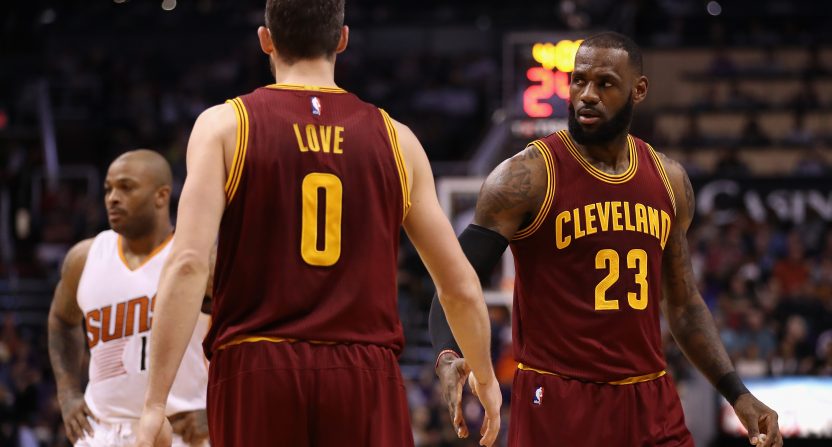 LeBron James is certainly not afraid to fire at the media these days. First there was the seemingly endless back-and-forth with Charles Barkley. And now, he’s going after Frank Isola of the New York Daily News.

The reason? This report, which actually broke during the epic Cavs/Wizards game Monday night:

The key passage in Isola’s piece is this one:

According to a league source, LeBron is the one pushing the Cleveland Cavaliers front office to acquire Carmelo even if it potentially means having to include Kevin Love, which is something Cavs management is opposed to doing.

So, who’s more likely correct? Well, Isola doesn’t generally deserve the benefit of the doubt. (If you need a refresher, here he was getting into and generally losing a feud with McLovin.) He’s also had Kevin Love getting traded or leaving via free agency for three straight years:

Frank Isola has literally had Kevin Love being traded or leaving in free agency three years in a row pic.twitter.com/l5ApyPT8ma

But in this case, it’s unlikely Isola made it up from scratch; his “league source” probably did indeed tell him this bit of information.

But here’s where things fall apart for Frank. Sometimes it’s more obvious than other times when a columnist or beat reporter is getting used as a mouthpiece, and this seems like one of those more obvious times.

Is it possible LeBron is unsubtly pushing for Carmelo? Sure. Is it also possible that he’s making it obvious that he wants to move on from Kevin Love? Anything’s possible!

But come on, do you really think LeBron is going to be that heavy-handed about it? He has layers of people around him to prevent just this sort of liability. And regardless, why would he want to move Love? If anything, his insistence of late has been the team needs to add more, not merely switch out pieces.

So then, what motivation might this “league source” have? Well, sowing discord in the Cavs locker room isn’t a bad outcome for just about any rival team. Whether or not that’s working remains to be seen, after LeBron’s denial and then this Kevin Love Instagram post (because of course):

It’s fun to imagine Kevin Love having a Winston Churchill quote on hand for any possible situation.

So, perhaps it’s time to look a bit closer to Isola’s stomping grounds? Might the Knicks be trying to stir things up to the point that Carmelo could bring back Kevin Love? Yeah, sure, that’s plausible. Carmelo’s value has never been lower, he has a no-trade clause, and getting Love in return would be a much better package than that Austin Rivers-centric Clippers deal that’s still making the rumor rounds.

Isola’s post predictably blew up, and LeBron’s reaction was added as an update, which is kind of funny, actually.

So, who’s more right? In this case, probably LeBron, though there’s always the possibility that Isola isn’t just parroting info a source wants him to parrot, in exchange for an article that gets a ton of clicks.

It’s a remote possibility, but sure, it’s there.

But most likely: trash.

Hopefully Love has some pithy Churchill insults prepared in case he runs into Isola.