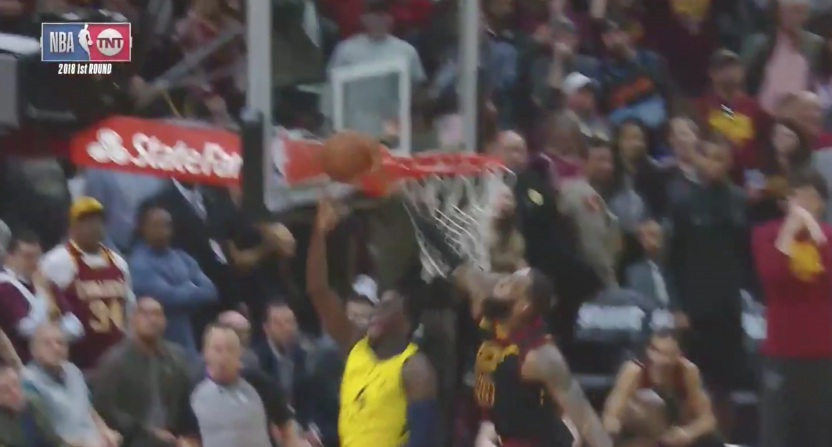 With seconds left in the Cavs’ essential Game 5 against the Pacers on Wednesday night, Indiana’s Victor Oladipo beat LeBron James off the dribble and cruised toward the basket for what would have been a go-ahead lay-up. Would have been, that is, if not for LeBron’s remarkable recovery speed, which allowed him to soar in for a dramatic block. Moments later, James hit a buzzer-beating 3-pointer to give Cleveland a 98-95 win in the game and a 3-2 edge in the series.

Afterward, the Pacers and their fans were angry, not only about the fact their team lost a close game but also about the TV replays that appeared to show James blocking Oladipo’s shot after it hit the backboard — which would make the play a goaltend. Here are a couple looks at LeBron’s “block.”

It looks like the officials missed a major goaltend call here pic.twitter.com/qEYZhPDYbT

And here is a closer look that pretty decisively shows the ball hitting the backboard:

Several Pacers players weighed in on the play postgame, all believing full-heartedly it was a goaltend. Via the Associated Press, here was Oladipo’s take on the sequence:

“I got a step on him,” Oladipo said. “I felt like I even got grabbed on the way to the rim, tried to shoot a layup, it hit the backboard, then he blocked it. It was a goal tend. It’s hard to even speak on it. It just sucks, honestly. It really sucks. Even though we fought our way back, we tied the game up, that layup was huge.

Asked whether his block was really a goaltend, LeBron deflected the question with sarcasm:

“I definitely thought it was a goaltend,” James said with a laugh. “Of course I didn’t think it was a goal tend. I try to make plays like that all the time and I mean he made a heck of a move, got me leaning right and he went left and I just tried to use my recovery speed and get back up there and make a play on the ball. And I was able to make a play.”

Cavs fans have tried to argue that because Cleveland wound up winning by three points, it wouldn’t have mattered if Oladipo’s lay-up had counted, but that’s not quite fair. Down two points, the Cavs might have run a different play, or LeBron might have tensed up just a bit, or his defender might have contested just a little harder. It’s impossible to know.

At the same time, the difference between a goaltend and not was, in this case, a few centimeters. This was not an egregious error from officials, merely a 50-50 (or 40-60) call that probably went the wrong way. Those types of mistakes happen all the time, benefiting different teams in different instances. In this case, the call went against Indiana, and although the Pacers and their fans are justified in their exasperation about it, all they can do now is look toward Game 6.