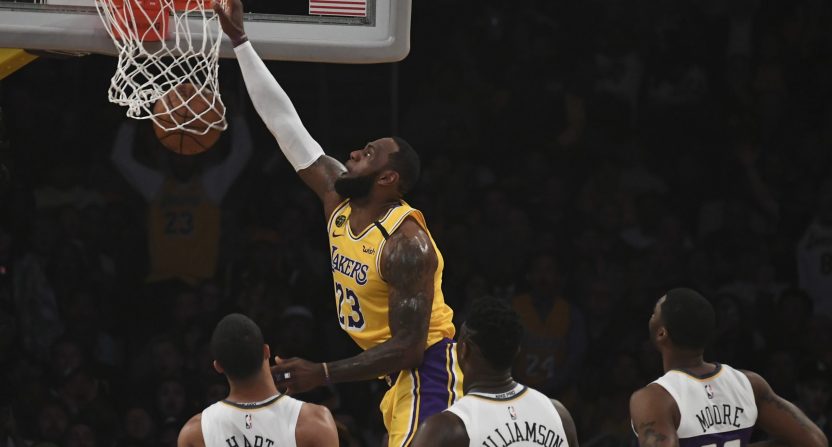 LeBron James scored 40 points to lead the Los Angeles Lakers to a 118-109 victory over Zion Williamson and the New Orleans Pelicans on Tuesday night.

Alex Caruso with the through-the-legs pass to LeBron James, who finishes with a big dunk over Josh Hart. pic.twitter.com/hejVRxbHIt

Jrue Holiday guarding LeBron James one-on-one in the post is not going to go well for the Pelicans. pic.twitter.com/qVQlBlm1Cn

That makes for the first time LeBron has scored at least 40 points since December 2018. The eye-popping stats don’t happen nearly as often as they used to for the King, but the four-time NBA MVP is still significantly valuable on the basketball court. In fact, one metric thinks LeBron is still the most valuable player in the NBA.

According to Real Plus-Minus (explained here), LeBron has been quite a bit more valuable than any other player. Entering play on Tuesday night (and his numbers obviously will get a boost from that performance), LeBron was the leader in Real Plus-Minus and valued at 13 wins from his Real Plus-Minus data. Only the Houston Rockets’ James Harden has also been valued at 9+ wins.

LeBron is still *quite* good. pic.twitter.com/9Q4OgzQXXh

Now, this is of course just one metric, and there are many other numbers that will suggest that Giannis Antetokounmpo (the likely NBA MVP), Luka Doncic, and Harden have been better this season. But it just serves as a reminder as to how freaking good LeBron still is and what his presence on the basketball court means, even at 35 years old.

The standings also show that, with the Lakers (44-12 and winners of six in a row) possessing a five-game lead for the No. 1 seed in the Western Conference (having Anthony Davis on the same team also helps things, of course).