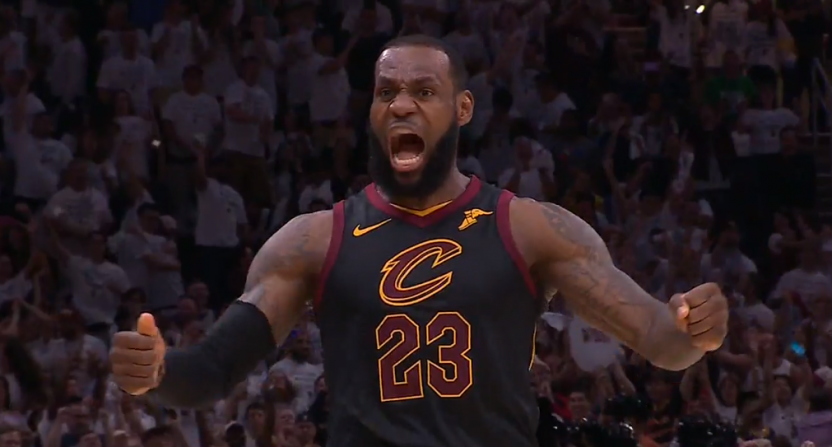 The best basketball player in the world made sure his team’s season wasn’t ending at home in Cleveland on Friday night.

LeBron James scored 46 points, pulled down 11 rebounds, and dished out nine assists in the Cavaliers’ 109-99 victory over the Celtics in Game 6 of the Eastern Conference Finals, to force a Game 7.

LeBron James records his 7th 40-point game this postseason, tied for the 2nd-most in a single postseason with Michael Jordan, who did it in 1989.

And with a minute left, LeBron had this and-one on a play that perfectly showed his otherworldly combo of strength and athleticism:

LeBron spoke with ESPN’s Doris Burke after the game, and reminded us of the best two words in sports:

So now we head to a Game 7, where LeBron has done quite well.

By the way, this is what LeBron has done in Game 7s in his career.

Sunday is gonna be wild as hell. pic.twitter.com/hrjnBW6iUf

But he’ll have to get it done in Boston this time, where the Cavs are 0-3 with double-digit losses every time so far in the series. And the status of Cleveland big man Kevin Love for Game 7 is unknown after he left Game 6 to be evaluated for a concussion.

Kevin Love is still being evaluated for a concussion and is out for the remainder of tonight's game. pic.twitter.com/R8SWC6R5sU

UPDATE: Per #Cavs Kevin Love experienced a hit to the head. Is continuing to be evaluated for a concussion & so as a precaution, he will be held out of play for the remainder of tonight’s game.

We’ll find out which team is going to the NBA Finals on Sunday night, when Game 7 tips off in Boston.