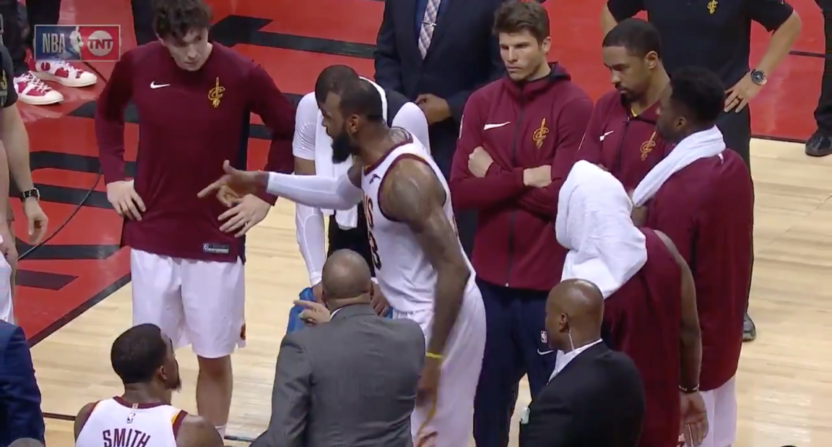 The Cavs have easily earned the honor of being the NBA’s streakiest team this season, and LeBron James is, unsurprisingly, not pleased with the team’s recent skid.

With his team down 59-36 late in the first half against the Raptors, James went nuts in a timeout huddle, yelling at his teammates and coaching staff.

This is presumably the result of lots of pent-up frustration. After a lackluster start, Cleveland found its footing in November and rattled off a 18-1 record over 19 games. But since beating the Wizards on the road nearly a month ago, the Cavs have lost seven of their last 10 and are headed for another defeat in Thursday’s game in Toronto.

But it’s a good guess that the following defensive blunder by Kevin Love right before the timeout was what set LeBron off at this time specifically.

Color commentator Reggie Miller put the blame is on him as well the team. In that instance, James had an opportunity to pick Love up with some help defense (although that would’ve left OG Anunoby, a 38.5% three-point shooter, wide open) and didn’t make an effort. But LeBron shouldn’t be expected to do literally everything, even though he’s probably capable of doing it.

We’ll never know for sure, but it’s possible the Cavs would be better if they still had Kyrie Irving at point guard instead of Isaiah Thomas. Irving managed to insert himself into the conversation after LeBron’s outburst, liking an Instagram video that showed the video of James yelling at the team.

Nobody doubts the Cavs are good enough offensively to win their second title in three years. They rank third in the NBA in offensive efficiency with 110.8 points per 100 possessions. But defense remains a problem as they compete with the Kings for the worst efficiency rating in the league.