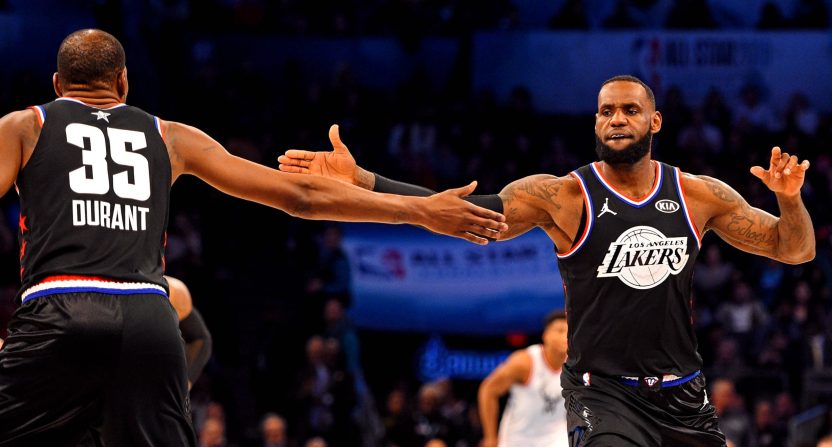 The last time that LeBron James and Kevin Durant played against one another in an NBA game was Christmas Day 2018. It appears that their streak of not playing one another will continue for some time to come.

The Athletic’s Shams Charania reported Tuesday that the Brooklyn Nets‘ Durant, who is currently out with an MCL sprain, will be re-evaluated again in two weeks. That’s good news, but it also means that Durant will miss the January 30 game against James and the Los Angeles Lakers.

Twitter user Billy Reinhardt shared a fascinating fact on Tuesday. If that news holds, and the Lakers and Nets don’t meet in the NBA Finals this season, these two league superstars will not have played one another for five years by the time they actually do next season, assuming that even happens.

The update on Kevin Durant means he will miss next week’s meeting with LeBron James.

If they don’t meet in the Finals, that will make their next potential matchup around FIVE years since the last one — Dec. 2018.

5 years without seeing the two best from the 2010s square up. pic.twitter.com/hDOVLGvvxg

While James and Durant met in the NBA Finals in 2012, 2017, and 2018, that subsequent Christmas Day game between the Lakers and Golden State Warriors remains the last time these two tangled. LeBron missed three games against the Warriors during the 2018-2019 season. Durant tore his Achilles in the Finals that year and missed the entire 2019-2020 season. And since then, they’ve been trading off injuries whenever the Lakers and Nets have met.

Surely they’ll eventually both be healthy at the same time and be able to be on the court together again, but given that LeBron is 38 and Durant is 35, it’s not like we’ll have too many more opportunities to see it happen.