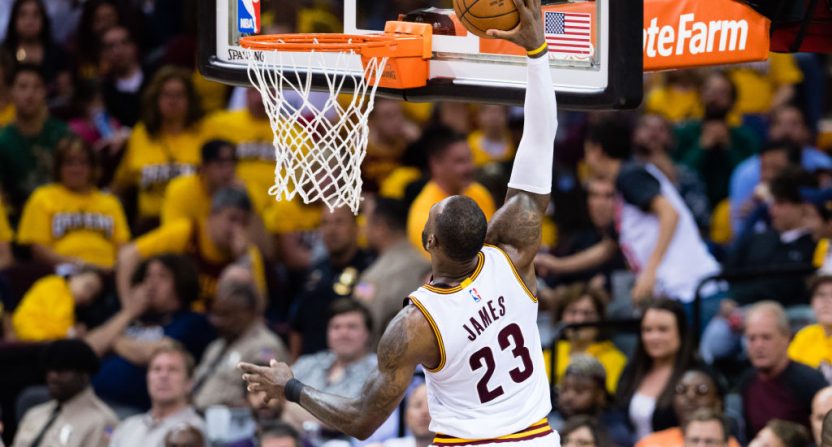 Who knows if NBA fans and analysts will ever solve the debate between LeBron James and Michael Jordan for best player of all-time? (People still consistently overlook Wilt Chamberlain, by the way.)

But James’ playoff performance this spring has been legendary. After averaging close to a triple-double in a first round sweep of the Pacers, James has taken his scoring to another level in the second round against the Raptors.

James dropped 39 points in Wednesday’s game against the Raptors, and he did it in 37 minutes of playing time while attempting just 14 field goals. That’s just the second time since 1984 that a player has posted a scoring line like that.

LeBron just scored 39 points on fewer than 15 shots. That'd been done precisely once in the playoffs since 1984. pic.twitter.com/b8lNtVRcv6

That’s a great piece of history to show just how efficient James was in Game 2. But here’s what will grab more eyes.

With those 39 points moved LeBron up to No. 2 on the all-time playoff scoring list, passing former Bucks and Lakers great Kareem Abdul-Jabbar.

With this bucket, LeBron James moves past Kareem Abdul-Jabbar for No. 2 on NBA's all-time playoff scoring list! pic.twitter.com/dIBKtJa24s

With 5,777 career points, James now trails Michael Jordan by just 210 points for the all-time record. If he keeps averaging north of 34 points per game these playoffs, he could pass Jordan by the end of the Eastern Conference Finals.

And in case you forgot, LeBron is only 32 years old.

And that’s not even where his accomplishments from Wednesday end. James passed Kobe Bryant for second-most 30-point games in NBA playoff history with 89 such performances. Once again, he still trails Jordan, who had 109 in his career.

LeBron James has passed Kobe Bryant (88) for the second most games in #NBAPlayoffs history with 30+ points. pic.twitter.com/PqfotUR2hd

As has been the case for most of James’ playoff opponents, no one could stop him.

And according to LeBron, he prefers playing on the road in the postseason, which means we could be in store for some special performances when the series moves to Toronto for Game 3.