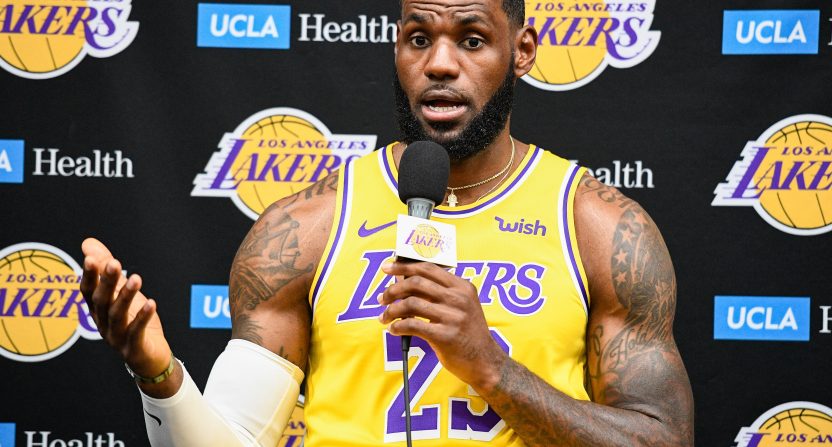 When LeBron James tweeted his second attempt at diplomatic damage control on Monday, he got ratioed to an extent that no one thought LeBron could get ratioed: 7.6k retweets, 62k likes, and 42k wild replies chanting “hypocrite” and displaying screenshots of old LeBron tweets. The Internet is not thrilled with him at the moment, and it’s not hard to see why: He backed off criticizing the Chinese government for human rights violations in the wake of Daryl Morey’s tweet supporting the Hong Kong protests.

It was unfortunate, and surprising, to see LeBron come out so harshly against Morey’s tweet. James didn’t directly counter the pro-Hong Kong substance of it, but he came right out and said that Morey “wasn’t educated on the situation at hand,” and that Morey should have considered the ramifications for the things he tweeted. Those statements have been interpreted by the populace as tacit support for China over Hong Kong.

Given LeBron’s many prior political statements on social justice and racial inequality, it was disappointing to see him withhold support for Hong Kong, a country protesting for civil liberties and democracy against the autocratic and Communist Chinese government. James dodged questions only barely, criticizing Morey for the tweet and implying that a pro-Hong Kong position is, at best, counterproductive. He should have been too media savvy and socially conscious to make such a statement.

James appeared as though he didn’t quite know what to say or how to approach the situation. That makes sense; his job is as a basketball player first, and the issues that he fights for coming from a personal perspective. He is an African-American in America, not a Hong Kong native.

It was hard to watch, though, as he became the NBA’s mouthpiece, reciting the company word. If you watch the above clip, you’ll hear him say “the game of basketball” at least a few times. The easiest cop-out is always “I’m not informed enough on the situation to speak on it” and James always fell back on that, until he started displaying passive-aggressive support for China under the guise of Morey criticism. He would have been better off with a “No comment,” or, better yet, with closer to minimal support for Hong Kong’s plight.

LeBron’s tweet afterward clarified that he was referring to the immediate ramifications of Morey’s tweet more than the diplomatic situation. He was trying to say that Morey should’ve “at least waited a week to send it” to reduce risk for NBA players and personnel in China at the time. On that point, James is right. China is unpredictable, and it could have reacted even more aggressively. That clarification, to some extent, helps.

Much of the criticism LeBron has seen originates from his and the NBA’s business interests in China, which are significant in this situation. James speaks less from a position of money (he’s making plenty of cash regardless) and more from a worldwide legacy perspective. He wants to maintain his reputation around the globe, and he appears to have underestimated the pro-Hong Kong response he would receive from most Americans.

The NBA is in a similar position. They have to find a way to save face in both China (where they make huge amounts of money) and America, which is an impossible task. Adam Silver, as progressive as he is, understands that the NBA needs China’s cash. He and the NBA, from a purely economic standpoint, could not afford to alienate China by supporting the protests. Their actions, and thus also LeBron’s, are understandable in this context.

But it’s always more complicated than simple business. The human rights abuses are real. Read the Human Rights Watch report on China and you’ll get a fuller picture of what the Chinese are doing. They have “stepped up repression and systematic abuses against the 13 million Turkish Muslims,” and HRW mentions “mass arbitrary detention” and torture of Uyghurs and ethnic Kazakhs. Human rights defenders endure “imprisonment” and “enforced disappearance.” There is more.

It is not Lebron’s job to stop Chinese human rights abuses. He’s doing plenty here to stop domestic injustices. He runs the LeBron James Family Foundation, he is active in Boys and Girls clubs, and he has been outspoken on numerous social justice issues. He built an incredible school that has been a boon for an Akron community.

He’s done too much for his China comments to belittle his past achievements. It’s fair to say that he should have spoken more eloquently on the situation, and that he should have avoided outright criticism of Morey. But speaking out against human rights violations in China would have caused significant repercussions. Put yourself in LeBron’s shoes, and consider the results of a pro-Hong Kong stance. It would have been admirable, but also idealistic.

NBA writer Josh Eberley tweeted that this is LeBron’s “Republicans buy sneakers too” moment. This situation is far less black and white than Michael Jordan’s desire to sell shoes, but there is truth in the idea that polarizing celebrities can’t go out and make everyone mad at them.

For the NBA as well as James, the best case scenario would have been the luxury of silence. Morey, as commendable as he is for his pro-democracy stance, rendered that impossible, and made things irreparably more difficult for the league and its prominent players, who can’t pronounce support for Hong Kong without further undesirable consequences.

Such is the reality of doing international business in a world with problematic countries and leaders. The NBA can’t (and shouldn’t) avoid China. The people, numbering in the billions, want basketball, and part of the NBA’s mission is spreading the goods. Basketball fans in China are not the people oppressing religion and exerting too much control over Hong Kong. But at some point the numerous issues with China were going to burst through a profitable partnership. Tricky questions were bound to arise.

Forcing LeBron James to provide the perfect diplomatic answer is naive. No such thing exists. As much as we’d love LeBron to come out staunchly in support of democracy, more problems might emerge. Let him focus on issues closer to home, and let the NBA toe an impossible line.