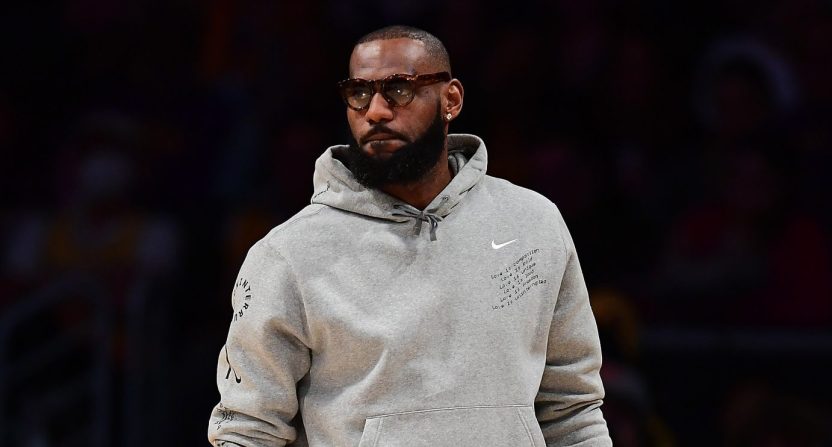 Los Angeles Lakers star (and billionaire) LeBron James is well known to be interested in the business side of the sports world. He is currently a partner in Fenway Sports Group, which is the parent company of the Boston Red Sox, Liverpool F.C., and Roush Fenway Racing.

These ambitions may shift to the hardwood when his playing career is ultimately over.

A snippet of LeBron’s YouTube show The Shop emerged on Thursday in which he admitted he wants to own an NBA team once he retires.

The location of the potential team that LeBron wants to buy is the interesting part of this. He stated that he wants to own a team in Vegas, which obviously does not currently have an NBA franchise. However, Vegas has been rumored as a top destination should an NBA team decide to relocate or a future NBA expansion happens in the future.

“I want a team in Vegas,” said James.

This is apparently something that James has been saying behind closed doors for some time because Bill Simmons essentially called this exact thing back in February.

NBA commissioner Adam Silver has discussed the topic of a possible expansion recently but didn’t divulge too many details.

“We are not discussing that at this time,” Silver said. “As I’ve said before, at some point, this league will invariably expand, just not at this moment.”

There will likely be some years left in LeBron’s legendary career, so it could be possible that by the time he is retired there is an NBA franchise in Vegas, whether he’s involved or not.

Many around the NBA world are seeing this as a real possibility in the future.

LeBron James is 37 years old, worth $1 billion-plus, a partner at Fenway Sports Group & says that he eventually wants to own a team in Las Vegas.

Things are starting to line up. https://t.co/26gWuqUq94

Can’t wait for him to be a better owner than Jordan too https://t.co/p0zKZYnJ1K

Vegas or not, (but likely Vegas) a LeBron James owned NBA team is in his post playing future. NBA will make it a reality I believe. https://t.co/nLQNuxlGse

We have seen in the past that an elite NBA player becoming the owner of an NBA franchise doesn’t translate to championships. Michael Jordan did so with the Charlotte Hornets back in 2010 and the team has been mediocre at best during his tenure, making the playoffs just twice.

If LeBron does become an NBA owner someday, we can only hope that it goes better for him than it has for Jordan.

Speaking It Into Existence! https://t.co/ARRiTp43cx