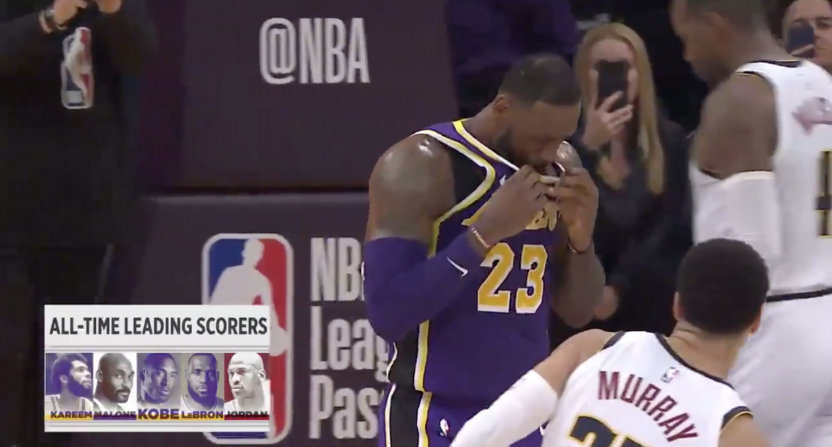 This is no doubt going to fuel the debate. With just 5:38 left in the second quarter, LeBron James passed Michael Jordan to move into fourth place for most regular season points in an NBA career.

After starting the game 0-4 in free throws, LeBron hit back-to-back threes to cut an early deficit to the Nuggets. A rough start, LeBron at one point was 2-6 in field goals along with being 0-4 at the line. The second quarter saw him get a quick bucket and move within five of passing MJ. LeBron remained solid in the second with a few jumpers and eventually passed Jordan with a layup and getting the foul.

That might be the only thing Lakers fans celebrate tonight. At the time LeBron passed Jordan, the Lakers were losing by 16 to the second best team in the Western Conference.

Entering the night, LeBron was sitting at 32,280 points, just 12 behind MJ. It’s arguable that Jordan has a bit of an edge when it comes to how they got there. Jordan got to his total in 118 fewer games and over 1,100 fewer three pointers made.

That only measures regular season totals. If you were to go off of combined regular season and playoff totals, LeBron would be ahead of Jordan by over a thousand points despite MJ’s six titles. None of this is to make a point about who’s better. Jordan temporarily retired for a couple years starting in 1993 and LeBron started his NBA career out of high school while Jordan spent three years at North Carolina.

Either way, despite that and the constant debate on what era was tougher, it can’t be denied that LeBron James overtook the legend. The wild part is that LeBron just entered the top ten in assists, making him the only player to be in the all-time top 10 in both categories. Just three people have more points than LeBron. Next will be Kobe Bryant (33,643 points) who is ahead by nearly 1,300 points. LeBron is on pace to pass Kobe and do it in fewer games.

The top two will be tougher to pass. Second is Karl Malone, who at 36,928 points is about 4,600 points ahead of LeBron. If he keeps up his scoring pace, LeBron might get there within three seasons. Kareem Abdul-Jabbar is tops at 38,387. Needing over 6,000 more points, if LeBron is still playing in about four or five years, he might get to Kareem. It’s going to be a race over the next five or so years to see if LeBron’s body can hold up that he can reach the top of the NBA scoring mountain.