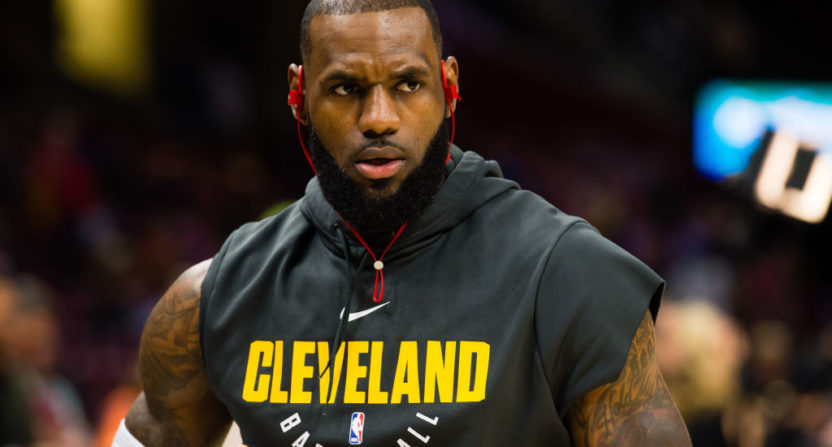 Add LeBron James to the long list of people who have watched the quarterback play in this year’s NFL and concluded some funny business is keeping Colin Kaepernick out of the league.

In an interview with ESPN on Sunday, James said Kaepernick had been “blackballed out of the NFL” and was unemployed only because of his refusal to stand for the national anthem last fall.

“I love football, but I’m not part of the NFL,” James told ESPN following the Cleveland Cavaliers’ practice Sunday. “I don’t represent the NFL. I don’t know their rules and regulations. But I do know Kap is getting a wrong doing, I do know that. Just watching, he’s an NFL player. He’s an NFL player and you see all these other quarterbacks out there and players out there that get all these second and third chances that are nowhere near as talented as him. It just feels like he’s been blackballed out of the NFL. So, I definitely do not respect that.”

“The only reason I could say he’s not on a team is because the way he took a knee,” James said. “That’s the only reason. I watch football every Sunday, every Thursday, every Monday night. I see all these quarterbacks — first-string, second-team, third-team quarterbacks — that play sometimes when the starter gets hurt or are starters that play. Kap is better than a lot of those guys. Let’s just be honest.”

LeBron went on to compare Kaepernick to Martin Luther King and Muhammad Ali, while praising the quarterback’s leadership and philanthropy. He also spoke more broadly about discrimination against black people in America.

We know that LeBron does not talk off the cuff about off-court issues. He chooses his words carefully and says only exactly what he wants to say. In talking on the record about Kaepernick, he made a deliberate choice to involve himself in an issue he views as important.

James’ observation that Kaepernick is better than many active NFL quarterbacks and is apparently being blackballed is hardly a unique insight, but it’s still notable to see the most famous athlete in America speaking so passionately and decisively about the situation and about racial discrimination in general.