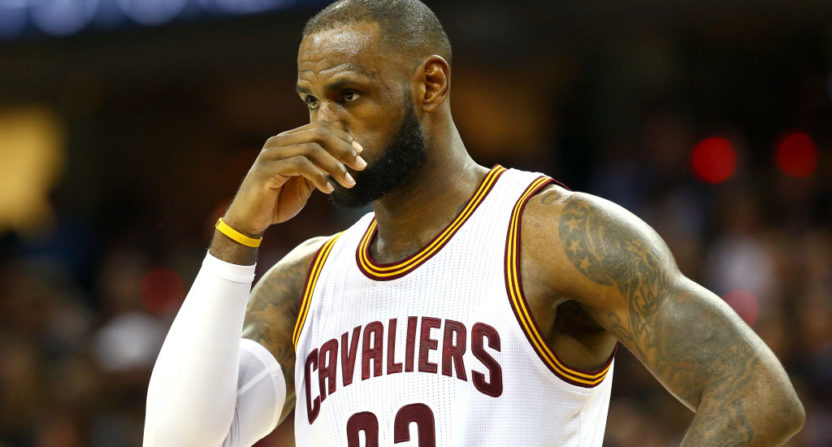 The debates over super teams in the NBA has been brewing for a few years now. With the Golden State Warriors on the cusp of a second NBA title in three years, the topic remains an important one for some. After reaching the NBA Finals in consecutive years and coming one elusive win from back-to-back NBA championships, the Warriors added Kevin Durant to the roster last summer and have been running through the postseason in historic fashion.

Is that fair? That was a question posed to LeBron James during a press conference. Not surprisingly, James was not at all critical of the concept taking the NBA by storm.

James is spot-on with his response and mentioned two good examples of teams with loads of talent adding one more star to the roster to improve their chances of winning.

“If I become an owner, I’m going to try and sign everybody,” James went on to say.

It’s worth recognizing that James was once a key part of an effort to build a super team not that long ago either. His decision to leave Cleveland to play for the Miami Heat with Dwayne Wade and Chris Bosh in 2010 was one of the more well-known attempts to create a super team led by three players at the top of their game. The Los Angeles Lakers in 2004 had Kobe Bryant, Shaq, Gary Payton, and Karl Malone on the same team (as Malone was simply trying to grab a ring before retiring). It happens. It’s been happening for years. It’s not going to stop.

And can we please stop vilifying the Warriors and any other franchise that puts together a so-called super team? The main objective in any sport is to assemble the best possible team you can so you have the best possible chance to win the championship. Teams like the Warriors adding Kevin Durant are doing absolutely nothing wrong and are playing within the rules of the game. And if a player wants to accept a smaller paycheck in exchange for a chance to win a championship, there is no issue with that either.

If you don’t like a super team, then you are probably just jealous your favorite team isn’t a super team.