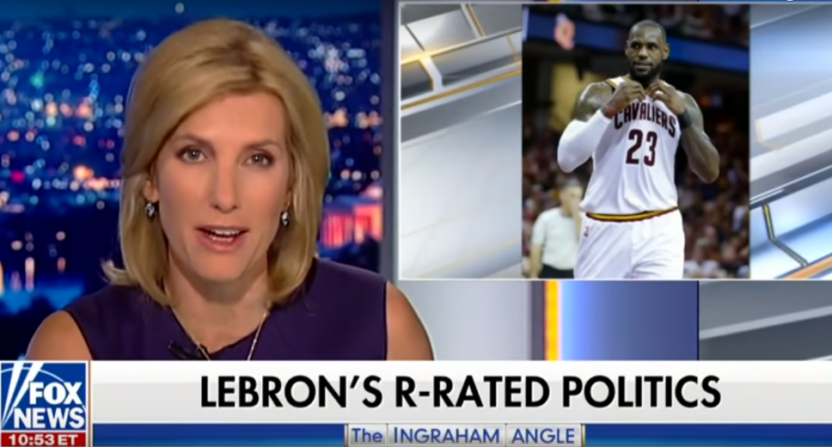 A Fox News host’s slam of LeBron James has now turned into the title for his forthcoming Showtime series. The three-part documentary series from James, his business partner Maverick Carter, and director Gotham Chopra was ordered last summer, and was initially described as examining “the modern history of the NBA and the league’s impact on global popular culture.” But it didn’t have a title at that point, or a lot of details on exactly what it would cover. Now, as seen by remarks from Showtime president and CEO David Nevins at the Television Critics of America tour Monday, the series may have shifted focus a bit, and it’s taken its title from Fox News host Laura Ingraham’s “Shut up and dribble” (part of a running bit of hers where she tells celebrities to keep quiet and leave the political talk to her) comments about James’ political comments back in February. Ingraham’s remarks drew criticism from everyone from Chris Long to Kevin Durant to Michael Wilbon, and they’re now the title of James’ series, as Variety‘s Joe Otterson describes:

The series is titled “Shut Up and Dribble,” taken from conservative pundit Laura Ingraham’s remarks to James in February when players from the Golden State Warriors declined an invitation to the White House after the 2018 NBA Finals. The controversy serves as a prologue to the series as it chronicles the modern history of the NBA and its players, starting with the 1976 merger of the freewheeling ABA and the more conventional NBA of today.

The league soon became an incubator for many of its top athletes to grow their brands beyond the court, becoming powerful players in commerce and fashion, and transcending the game to become cultural icons. It will premiere on Showtime in October.

…“If being a star athlete is inherently a political experience, ‘Shut Up and Dribble’ tells that complex and dramatic story from the past to the present and from the inside out,” said Nevins. “LeBron James is one of many competitors whose place in the spotlight has led not to silence but perspective, and he, Maverick Carter and Gotham Chopra have given us an important, insightful docuseries that should bring their fans and fellow citizens to a higher level of discourse, rather than the dismissal satirized in the title.”

It’s certainly notable that Ingraham’s shot at James has now turned into a series title for him, and it’s also notable that it sounds like this series is now going to cover players’ impacts in the political realm as well as on “global popular culture.” Of course, some of that may have been in the works all along, as the initial description didn’t have a ton of details. But it definitely sounds like there will be politics covered here, and the title’s certainly an indication of that. And the timing here is also interesting, with James and politics again in the news thanks to U.S. president Donald Trump’s Twitter criticisms of him (over James appearing on CNN to talk to Don Lemon about the new school he’s funding in his hometown of Akron, Ohio) and the sports world firing back at Trump (including Skip Bayless, Stephen A. Smith, Michael Jordan, Karl-Anthony Towns, and Lane Kiffin).

It will be interesting to see how this project eventually turns out. There’s a whole lot of history for it to cover, and a rather broad lens with the cultural focus, and now that’s perhaps expanded even wider to politics. But there are some promising names behind it, with Chopra finding success with Religion of Sports, Tom vs. Time and Kobe Bryant’s Muse, and Carter and James previously producing projects like the Fox/SI TV documentary 89 Blocks. Oh, and this is part of James’ premium cable domination, as he also has a barbershop show coming to HBO this month. And thanks to this insult from Ingraham, he now has a name for this Showtime series.