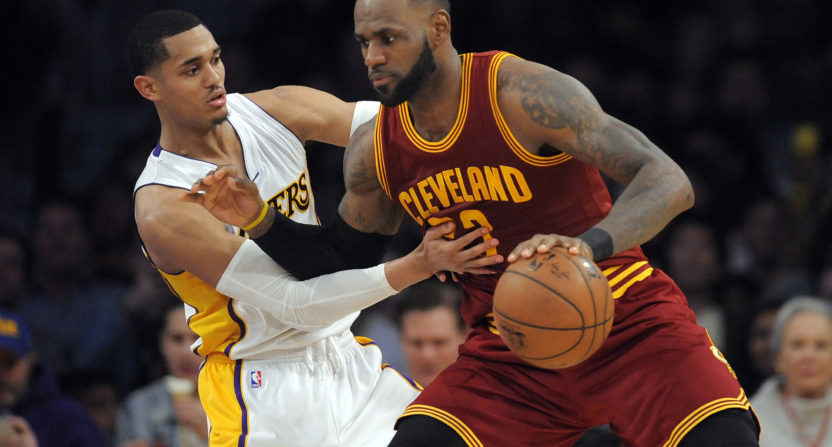 Once again, LeBron James’ free agency will be the story of the NBA offseason next summer. And once again, the league’s most glamorous and deep-pocketed teams will line up to pitch their case to the world’s best player.

This time around, the Los Angeles Lakers have been mentioned repeatedly as a favorite for LeBron’s service. They’re a big-market team with a long history, some enticing young players and the cap flexibility to potentially add not only James but also another star or two. And if you’re the type to read deeply into LeBron’s every action, you might see his buying a house in L.A. and complimenting Lonzo Ball on Instagram as evidence of his interest.

Well, it might be time to slow down. According to a report from ESPN’s Ramona Shelburne and Brian Windhorst, league sources are calling LeBron-to-Los Angeles “a longshot.”

Though obviously none of us can see into LeBron’s mind, it figures that at age 33 he’ll prefer to either stay in Cleveland or head somewhere he can win immediately. That could be Houston, where James Harden and banana-boat buddy Chris Paul have the Rockets playing like title contenders. Maybe it could be Philadelphia, where Joel Embiid and Ben Simmons look like one of the best duos in the game. It probably wouldn’t be L.A., where Ball has struggled with his shot and Brandon Ingram appears destined for a good career but not a transcendent one.

In the end, we’re all just guessing. LeBron has surprised us in free agency twice before, and he may very well do it again. Toward the end of their piece, Shelburne and Windhorst essentially threw up their hands.

“The most dangerous thing in the NBA is LeBron as a free agent,” one league source said.

In other words, get ready for LeBron Mania 3.0.