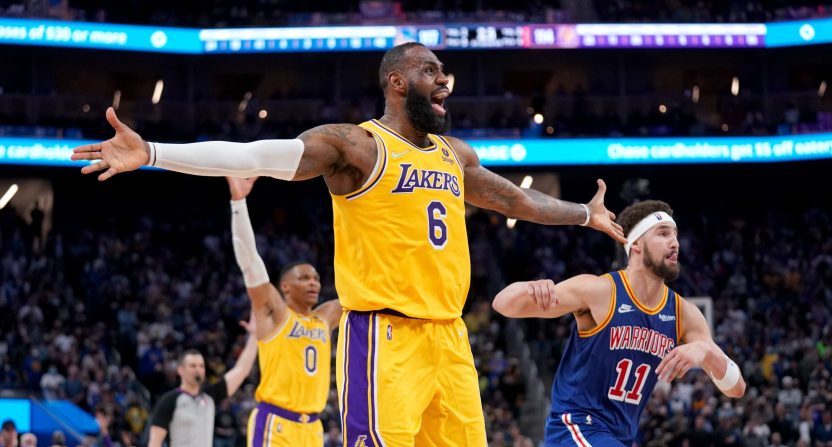 The Los Angeles Lakers’ hopes of making the NBA playoffs officially ended with a loss on Tuesday to the Phoenix Suns.

It was a disappointing year for the Lakers, who dealt with injuries to top players Anthony Davis and LeBron James all season, along with some shaky play much of the year from Russell Westbrook. Despite it all, LeBron was excellent when he was on the court in his 19th season in the NBA, averaging 30.3 points per game, the second-highest scoring average of his career.

However, the team’s struggles have raised questions about the future of the Lakers going forward. There won’t be much wiggle room for the team this offseason to make big moves and shake things up given Westbrook’s massive contract. It is expected that Westbrook will accept the player option on his deal, which will come out to $47 million for the 2022-23 season.

This certainly puts into question how long LeBron will want to stay in Los Angeles. He has one year remaining on his contract, making it an intriguing question as to where he could potentially go in the near future.

James discussed some players that he would love to play with in the future on Wednesday via his YouTube talk show The Shop.

Son Bronny James was named as his top pick for someone he wants to play with in the future. This comes as no surprise, as James has already stated his interest in teaming up with his son, and that whichever team drafts his son will be a place of interest for him.

When it comes to players already in the NBA, however, LeBron did have a specific player in mind as a potential teammate.

“Steph Curry is the one I want to play with for sure in today’s game.”

This certainly makes for an interesting possibility in the future. NBA fans got upset about the balance of power when Kevin Durant joined the Golden State Warriors. We can only imagine the hate that someone as polarizing LeBron would receive if he ended up joining the Warriors dynasty for the last few seasons of his career alongside Curry.