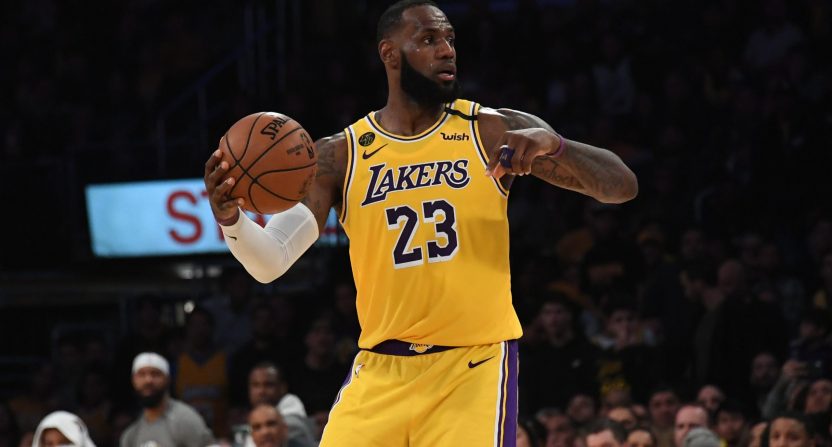 LeBron James is always chasing the ghost of Michael Jordan. A seemingly elusive pursuit that often evades his grasp. In the minds of some, he will never measure up. This is largely a generational divide. People unwilling to budge because the players of their era have achieved mythical status. Whatever the differences are between LeBron and M.J., we can reasonably acknowledge that we’re splitting hairs: 1 vs. 1A.

But James is still trying to separate his greatness from Jordan. At the age of 35, James is an MVP candidate. His Los Angeles Lakers (49-14) could finish with the league’s best record. And the Lakers are the betting favorite to win the NBA championship.

“At 35, what this [expletive] is doing is incredible. He is the MVP,” Anthony Davis told Chris Haynes of Yahoo Sports. “That’s no disrespect to that [expletive] in Milwaukee. Giannis is having a hell of a year, but if you think about what the most valuable player means, that’s ’Bron to us. Look at our numbers when he’s off the floor. He’s the MVP.”

James enjoyed one of the most satisfying regular-season weekends of his career by beating the Milwaukee Bucks and the Los Angeles Clippers, and totaling 65 points and 17 assists. He continues to remind us that we’ve never seen greatness like him.

He’s on pace to become the oldest player in history to lead the league in assists (10.6). Last month against Denver, he became the oldest player ever to record a multiple 30-point triple-doubles. James is second in the league in real plus-minus (6.77), second only to Giannis Antetokounmpo (7.85). And he’s closed the gap on Antetokounmpo for MVP honors. It would be LeBron’s fifth regular-season MVP award.

“I think he’s been amazing all year,” Clippers coach Doc Rivers said. “It’s just remarkable watching him play. I’ve never seen a guy get better at 35 in sports. He looks stronger, faster, and the other thing, he’s always been a high IQ player. Probably one of the smartest players to ever play basketball. He’s beaten a lot of people with his brain.”

At 35, Jordan won the last of his six championships and his fifth MVP award. James will never match Jordan’s six NBA titles in six chances. This flawed argument conveniently leaves out all the times Jordan lost in the playoffs before reaching the NBA Finals. Jordan began his career 0-for-2 in the first round. James has never lost a first-round playoff series, winning 52 out of 60 games. Plus, James went to the NBA Finals eight times for two different teams (the Miami Heat 2011-2014 and the Cleveland Cavaliers (2015-2018). That feat is unlikely to be matched in the modern NBA.

James is pursuing a championship for his third different team and fourth title overall. Even the staunchest Jordan supporter would have to recognize that achievement as amazing.

To win it all this year, James will likely have to go through two irresistible forces: Kawhi Leonard’s Clippers and Antetokounmpo’s Bucks. The Clippers (44-20), relying on load management, haven’t even played their best basketball yet. Leonard has missed 13 games, Paul George 22. They are seemingly indifferent about clinching the No. 1 seed in the West. But they were 10-0 when fully healthy and at full strength before last weekend’s loss to the Lakers.

By comparison, LeBron has missed just three games and Anthony Davis eight. Load management worked wonderfully for Leonard last year; he played just 60 games en route to single-handedly lifting the Toronto Raptors to an NBA title. Plus, the Clippers have the best scoring bench in the league (51.3 ppg).

James will have to be at his best to topple the Clippers. And even if he gets to the NBA Finals, there are the Bucks.

In short, LeBron potentially will face two teams that are better than Jordan ever faced in a single playoff run. During Jordan’s championship run, he never faced as skilled a two-way player as Leonard. And he never played a team that ranked among the top-19 all-time in scoring margin. If LeBron wins another title, he would’ve beaten this dominant Bucks team and the 73-win Golden State Warriors (after trailing that NBA Finals 3-1).

To do this, LeBron needs to stay healthy and get help. The Lakers’ lack of depth means they have a slim margin of error. Any injury to LeBron or Davis would be catastrophic. The recent additions of Markieff Morris and Dion Waiters might help. Waiters, shooting 47.1 from three-point range, could aid a team that’s No. 18 in three-point accuracy (35.4) this season.

This will be LeBron’s first foray into the Western Conference playoffs after spending most of his career in the East. It will likely be a considerably harder path to the NBA Finals. But if he wins another championship, James might finally catch Jordan’s ghost.