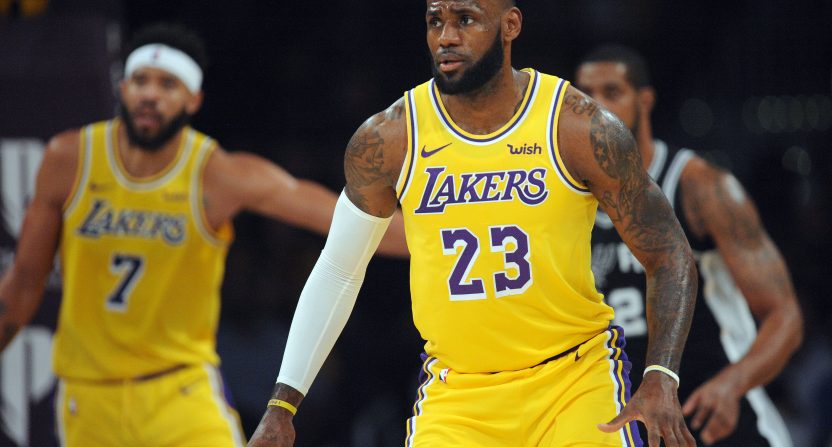 We’re four games into the “LeBron James-is-a-Laker” experience, with LA’s three losses overshadowed by the massive brawl at the end of their game against The Rockets. Growing pains have shown in the Lakers, particularly defensively against teams talented at the guard position.

Offensively, though, the Lakers have fared relatively well. They’ve lacked the firepower to stick with good shooting teams in crunch time, but scoring 119 and 115 points in losses against the Trail Blazers and Rockets, along with 142 in an OT loss against the Spurs, that indicates some level of offensive competence. As everyone learns to play with LeBron, they’ll improve.

Shooting has been the primary issue. LeBron teams need players to spread the floor and hit catch and shoot 3s. The Lakers have no one whose skill-set is standing in the corner and hitting treys; only LeBron can shoot at a respectable clip from deep. LA are shooting a pitiful 24 percent from three despite averaging more than 30 attempts per game.

LeBron is scoring 25.0 points per game, a scoring figure that could be higher if teams weren’t able to close on him so quickly every time he drives. He was double-teamed constantly by both Portland and Houston, often by whichever guard was tasked with guarding Rajon Rondo or Lonzo Ball. It’s easy to lay off Rondo or Ball when both are hesitant to pull the trigger.

The same can be said for Brandon Ingram, Josh Hart and Lance Stephenson. More than ever, this Lakers team needs a big that can pick and pop, like Chris Bosh and Kevin Love have done for LeBron in the past. Javale McGee looks rejuvenated in purple and gold, but he very much will not be that guy.

Ingram, now suspended four games for his role in the Rockets brawl, has shot relatively efficiently from the field. At 0.5 assists per game, though, he has to take on more playmaking responsibility. If this team isn’t going to space the floor and shoot, they have to buy all the way into playing fast and attacking LeBron-created space on the dribble. LA have a surplus of ball-handling. When Ingram’s man tilts too far toward LeBron, Ingram has to be able to receive a LeBron dish and move quickly into a disjointed defense.

Rarely has LeBron been surrounded by a cast like the one he has now. No one can shoot, but everyone can create their own shot, and most of them can pass. Ball and Rondo are genius passers. When Rondo returns from his suspension, Luke Walton should test more Ball-Rondo lineups, going all in on ball-handlers. Having Kyle Kuzma screen for Rondo with Ball standing open off to the side ready to receive a pass and dish to an open player is an enticing proposition.

Kuzma could be a Lakers X-factor. When he’s at center instead of McGee, LA have given up dramatically more points. A small sample size, sure, but McGee has protected the rim effectively, something Kuzma won’t necessarily do. Kuzma has a much higher offensive ceiling than McGee, with more athleticism and scoring. LA have to unlock Kuzma’s offensive potential.

None of the non-LeBron lineups have enough of a sample size to evaluate, but the passing has looked good through two games. The first time LeBron sat against Portland the Blazers feasted, but things have stabilized since. Ingram is part of the reason why, as is Ball, who has more often been running the point when LeBron sits.

Rondo is averaging 10.5 assists per game, playing around 30 minutes with Ball on a minutes restriction coming off offseason knee surgery. Ball will be interesting to watch while Rondo serves his suspension. His shot is still developing, and he’s still in the process of returning from the knee surgery, though he has looked perfectly capable of running the floor.

Speed is still the key for this Lakers team. With LeBron, who has made finding rest a science, it’s actually helpful — as the young guns sprint into space, LeBron can hang back. It’s a win-win for LA, because when LeBron runs with them, he’s unstoppable.

Issues defensively rest partly in rim protection and partly in young players learning an NBA defense. Portland and Houston are great offensive teams, particularly the Rockets, who went at Kuzma and Ingram often on switches with James Harden. Clint Capela also found success as a rim-runner, overcoming McGee with athleticism and simply overpowering Kuzma. That they didn’t have a similar problem with Jusuf Nurkic in Portland could indicate the problem stems more from Houston’s offensive dominance and Capela’s talent than LA’s defensive woes.

A tough, crowded schedule looms for a team that will be missing two starters this week. It looks likely we’ll see more Stephenson and/or Michael Beasley minutes, which have not gone well. If there’s one thing the Lakers have learned, there are no easy stretches in the Western Conference.