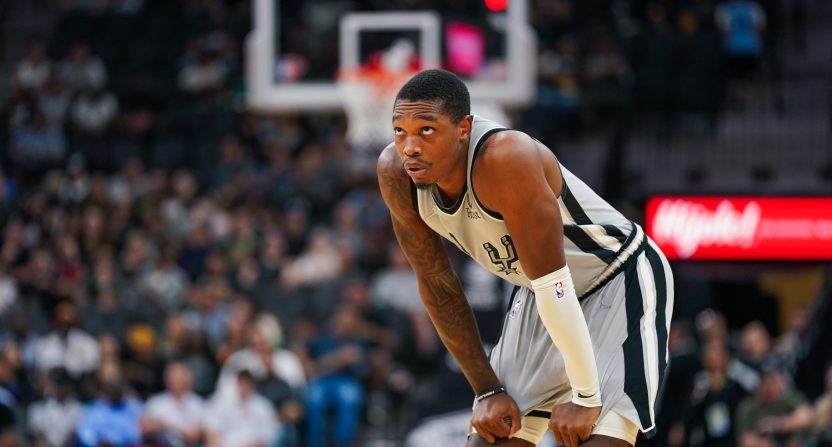 The San Antonio Spurs are committing to a full rebuild this offseason. Dejounte Murray was traded to the Atlanta Hawks in exchange for Danilo Gallinari and three first-round picks. Now, another guard, Lonnie Walker IV, is also heading out of town to play for the Los Angeles Lakers.

According to The Atheltic’s Shams Charania, Walker agreed to a one-year deal worth $6.5 million on Thursday after the Spurs decided to retract the offer they made him. If the franchise did decide to match the Lakers’ offer, Walker would become a free agent, giving the Spurs the ability to match any opposing offers teams sent his way.

With this information, it is even more of an indication that Gregg Popovich and Co. are completely blowing up the roster.

While Spurs fans may not be happy with another key piece leaving town, many on Twitter praised the signing, with some thinking Walker will be a solid replacement for Malik Monk in L.A.

He’s gonna be a perfect Malik Monk replacement. Monk was really solid last year and this is a great bet on himself move to add to a playoff team

Lonnie Walker and Troy Brown Jr. are best friends, and now they’re teaming up on the Los Angeles Lakers. Love these signings.

The Lakers are doing everything in their power to get back to the mountain top after their 2021-22 season fell apart after coming in as the odds-on favorites to win the NBA Championship. Those plans may also include Kyrie Irving, who is rumored to want to team up with his former teammate LeBron James in Los Angeles.

After a rookie season that saw him average only 2.6 points per game in 17 games, Walker IV made a massive improvement in his game, jumping his averages up to 12.1 pts, 2.6 rebounds, and 2.2 assists this past season as the Spurs’ sixth man.

As for the Spurs, many across the NBA media world believe the Spurs getting little return from the Murray trade as the team entering the sweepstakes to draft French hooper Victor Wembanyama, who is currently the No.1 overall prospect in the 2023 NBA Draft, according to ESPN.