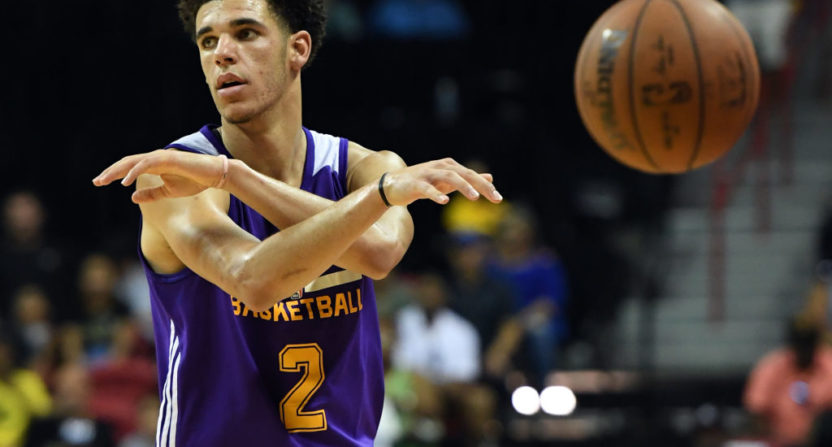 The NBA won’t be back for another three months, but on this July Monday morning, an NBA game was leading ESPN.com’s sports coverage.

Naturally, it was a Summer League game. 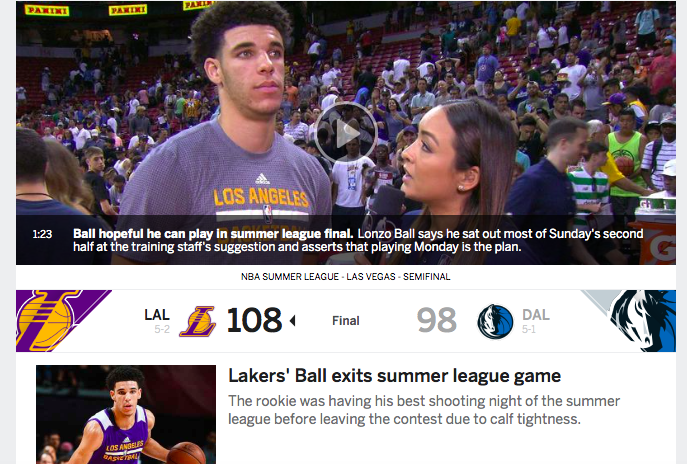 Yes, Lonzo Ball playing a Summer League game—a game that absolutely does not matter—was ESPN’s top story in the entire sports world. And with that low bar, it’s clear that Lonzo-mania is about to be ESPN’s biggest new obsession since Tebow-mania.

Ball and Tim Tebow are very different cases. Tebow largely made his name himself, while Ball’s dad, LaVar, is quite possibly more popular than he is.

Together, the Balls have dominated the sports and pop culture talk this summer. LaVar took over the publicity at the NBA Draft, he’s been on WWE Raw, he’s gotten into a fight with Joel Embiid, and he’s also proven to be problematic following a sexist comment during a TV appearance. For his part, Lonzo has been a content producer’s dream on the court: His Summer League debut was atrocious, which brought out all the hot takes, but he followed up that performance with a dominant Summer League overall.

Has the public been getting Ball fatigue? Apparently not. ESPN reported record Summer League ratings, thanks to Lonzo, and that means we’re only going to get more of the Balls on TV. Love them or hate them, they’re here to stay, and Tebow provides a blueprint for what is to come.

Contrary to popular belief, Tebow didn’t seek out media coverage. He didn’t actively fight against it, as many athletes do, but he wasn’t looking for attention in the way LaVar Ball is. He was simply a polarizing figure—a very good college football player and a very below average NFL player who was very public about his religion—about whom ESPN found people would love to watch, or would hate watch, anything.

There are differences, for sure, not the least of which is that it’s LaVar’s personality that makes Lonzo so polarizing, and the fact that Lonzo is actually going to be a very good professional player, unlike Tebow. But despite those differences, the Balls and Tebow both present an opportunity for ESPN to bring in big profits, which is important at a time when the network is losing money and can’t figure out how to turn things around.

But it’s not just ESPN. This is a volatile time for media, and layoffs have affected just about everyone, including Fox Sports, CBS, Sports Illustrated, Yahoo, MTV News, Huffington Post, and Vocativ. Everyone is looking for a way to make money, and now, they’ve found an athlete, and a family, that people are going to watch. That means lots of Ball Family content, no matter much you, as an individual, might not want it.

Even better for ESPN and everyone else is that Ball will likely be around for a long time. Unlike Tebow, he projects as a very good professional player, and he’s shown that in the Summer League. He already has natural rivalries with players like Embiid in a league that showcases personalities and rivalries, and he’s playing for the Lakers—the team with perhaps the most marketing potential when it’s at its best.

All of this adds up to a content producer’s dream, at a time when sports media needs that content the most. As evident by its coverage of Summer League, ESPN seems to think the Balls can at least partially be their savior.

That means it’s time to get ready for Tebow-mania, round two—except maybe to an even greater extreme.