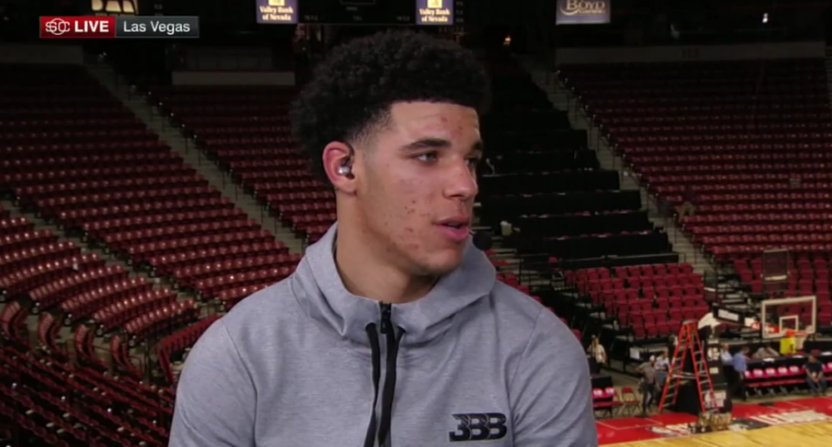 Who could have ever foreseen the fortunes of Big Baller Brand going sideways?

While LaVar Ball and his sons have been the faces of Big Baller Brand since it launched in 2006, the apparel and basketball event company also included several other financial backers to help get it off the ground. One of them was Alan Foster, a friend of LaVar’s who owns 16.3 percent of the company. In fact, Foster has also acted as a business manager for all of the Ball family companies is said to have been the one to convince LaVar to start Big Baller Brand to begin with.

There’s a lot of money tied up in BBB these days given all the exposure it’s gotten from the various shoe and clothing lines as well as the many events they’ve created or sponsored. And it turns out, some of that money is missing and Foster appears to be involved.

That’s the reason Lonzo Ball, who is currently a guard for the Los Angeles Lakers, has severed ties with Foster “over concerns that the longtime family friend has a criminal past and also has not adequately accounted for the whereabouts of roughly $1.5 million from Ball’s personal and business accounts.” He reportedly made this decision independent of his father.

ESPN is reporting that Ball thinks Foster has been skimming off his business and personal finances. “As a result, I have decided to sever all ties with Alan, effective immediately.” Questions have been swirling around Foster’s decision-making since Lonco’s financial advisor started taking a closer look at Lonzo’s and Big Baller’s taxes in the last year. ESPN says that Lonzo has expressed his concerns about Foster for some time to his father, but ultimately it was left up to the elder Ball to deal with. It wasn’t until this week, however, when LaVar reportedly gave the warnings his full attention, telling ESPN that the situation is “devastating.”

“I’ve always believed in the best in people. Regretfully, I put my complete trust in Alan Foster to manage my son’s business affairs,” LaVar said in a statement to ESPN. “At the end of the day, family comes first, and I support Zo wholeheartedly. Together, we will make this right.”

Foster doesn’t exactly do himself any favors with the way he apparently dodged ESPN over questions about the finances:

When contacted by ESPN last week to discuss his past and the Big Baller Brand, Foster initially offered to arrange an in-person meeting alongside LaVar at the Ball estate in Chino Hills, California. But repeated subsequent attempts via email, phone calls and text messages this week to reach Foster for his perspective were met with no response. Late Thursday night, he suggested meeting in person at the Ball estate on Friday, but then late on Friday suggested mid-next week because he was “super busy”; he otherwise offered no comment.

ESPN also noted that Foster has a criminal history involving finances. In 2002, he was sentenced to over seven years after pleading guilty to fraud and money laundering in a scheme to defraud investors. Foster ended up paying $3.7 million in restitution.

Sounds like he might be doing some very familiar once again soon. Especially as ESPN details how that $1.5 million might just be the tip of the iceberg when it comes to what Foster’s been skimming from the Ball family.

The same sources told ESPN that, last week, Lonzo’s personal manager, Darren Moore, raised questions with Lonzo and Lukanga about a separate matter involving Foster — taxes related to income from the Ball family’s lucrative Facebook Watch reality series, “Ball in the Family.” Moore told ESPN that he had been unsuccessfully trying to determine — through Foster — whether expenses and revenues related to the series had been allocated properly by Foster. Moore declined to answer additional questions but issued a statement this week distancing himself from Foster.

It remains unclear in the meantime what, exactly, it means that Ball is severing ties with Foster. Lonzo owns 51 percent of BBB, LaVar owns 16.4 percent, Lonzo’s mother owns 16.3 percent, and Foster owns the remaining 16.3 percent. It’s also unclear what other financial entanglements the Ball family, specifically LaVar, has with Foster.