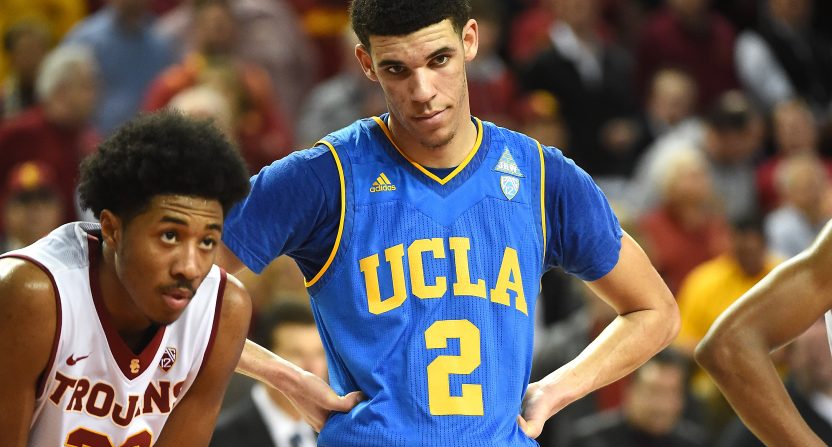 Lonzo Ball is literally balling out these days for the UCLA Bruins. The freshman averages 15.4 points on better than 55 percent shooting (43 percent from beyond the arc.)

So, if you’re Ball’s dad, and you’re asked to describe your son’s play, you could be forgiven for a little hyperbole.

But that doesn’t mean you can’t go too far.

According to CBS Sports, Mr. Ball declared that his son was on a whole different level than Steph Curry.

“Ah, he recognizes that his son has a lot of work to do to reach the top of the NBA echelon, wise patience,” you might be thinking.

Uh, well, about that:

“Heck no!” Ball said. “He’s going to be better than Steph Curry. Steph Curry’s really good, but my son is young, he’s got time to go. And you only consider him good because he won a couple of championships. What if he didn’t win no championships? He made some shots at the right time. But he’s not as young as my boy.”

Ball’s father opened the talk with TMZ with this blast about Jason Kidd:

Let’s just try and break this all down without getting all emotional like LaVar Ball has.

We get a father’s love for his sons and all of that, but come on man. There’s no denying Lonzo Ball is having himself one hell of a season. There’s also no denying there’s a large jump from Ball at UCLA to Ball balling out over Steph, Russell Westbrook, LeBron James, or anyone else in the NBA.

Until he can help his team win 74 games, set the single season three-point makes record, win a NBA title and become the only two-time unanimous league MVP…well, he ain’t as good, let alone better than Steph Curry.

Let’s hold off on the hyperbole just a bit, huh?