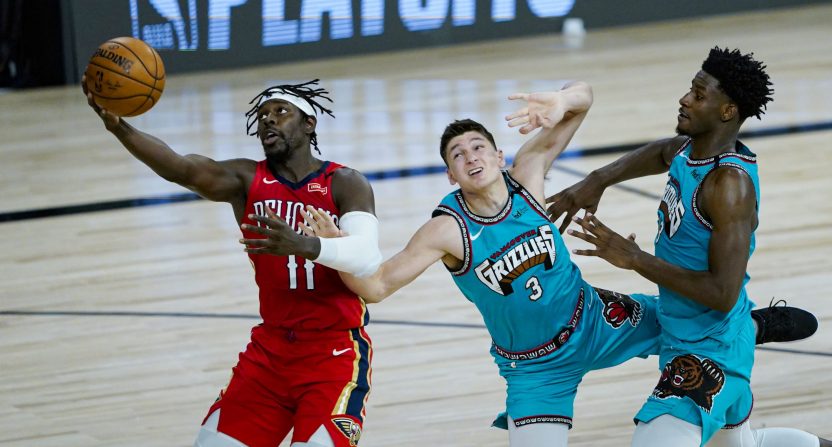 The NBA is a fascinating position heading into this unique, fast-paced offseason. Almost every team is, in theory, trying to win right now. Outright tanking is out of fashion. Even the lower-tier teams who lack talent — the New York Knicks, Charlotte Hornets, Cleveland Cavaliers, Detroit Pistons, etc — are developing youngsters and would like to accelerate their postseason timelines. The Knicks, of course, are perpetually on the hunt for a star.

Everyone wants to win pretty urgently. I count 10 teams who can reasonably consider themselves at least close to the championship conversation. Below that group consists of many teams that boast star players and want to maximize whatever window exists for them right now.

There aren’t many sellers out there. But the market for superstars is there. Teams that need to take a step forward — either into the playoffs or into Finals contention — will be willing to pay up for the various stars that could be on the market. While there are no star free agents until 2021, it’s possible that multiple big trades could take place.

The clearest available star right now is Jrue Holiday, the New Orleans Pelicans’ All-Star guard who’s reportedly being shopped. Holiday is 30 and has a player option after this season. Any number of teams could enter the Holiday sweepstakes, with New Orleans searching for complementary players to Zion Williamson and Brandon Ingram who fit their timeline.

Holiday would be ideal for teams like the Brooklyn Nets (looking for a third star) and the Denver Nuggets, who would like an upgrade at guard over Gary Harris. It’s tough to know what kind of package the Pelicans would accept. The best talent potentially available for Holiday might be Caris LeVert, if the Nets are willing to part with him, but LeVert needs the ball and needs to create for himself. He wouldn’t be a seamless fit alongside Ingram and Williamson, who already have their issues fitting next to each other. Jarrett Allen is likely a no-go for the Pels given his similarity to Jaxson Hayes.

Harris had a pretty rough season in Denver, so the Nuggets’ projected offer of Harris, Bol Bol, and a first-round pick doesn’t seem enticing. (Denver apparently won’t include Michael Porter Jr.) If Tyler Herro isn’t available, the Heat will have a hard time entering these discussions. Miami could, though, base an offer around Kendrick Nunn and picks, and maybe even sign-and-trade Derrick Jones Jr. — I don’t know the cap feasibility of that, but at least hypothetically, a versatile 23-year-old defender would be a nice asset for New Orleans.

Could the Minnesota Timberwolves offer Jarrett Culver? Could they trade back from No. 1 overall in the draft and leverage the resulting pick? Minnesota would be a great fit for Holiday, but their offer likely wouldn’t be based around surefire NBA talent. The Los Angeles Lakers would have to perform some cap shenanigans to get into these discussions (same goes for Chris Paul).

One destination that could make some sense is Dallas; the Mavericks have a nice set of attractive role players on favorable contracts. Tim Hardaway Jr.’s contract assures that a Holiday trade would work. Any combination of Delon Wright, Maxi Kleber, Seth Curry, Dorian Finney-Smith, or Dwight Powell could be attractive to New Orleans, depending on whom Dallas would be willing to part with.

The Mavericks will be an interesting team to watch overall. They have a bona fide MVP candidate in Luka Doncic, who proved in the bubble that he can cook teams in the playoffs. Adding a star — like Holiday, or perhaps Bradley Beal — could elevate them further in the playoffs. Dallas had the best offense in the league last year and gave the Clippers a run for their money even without Kristaps Porzingis for stretches. They’re in the inner circle of candidates to attract Giannis Antetokounmpo in 2021.

Adding defensive role players should be a goal for them. One complete shot in the dark: could the Mavs compile an offer for Eric Bledsoe? Bledsoe’s value is going down after multiple underwhelming playoff performances with the disappointing Bucks. In Dallas, Bledsoe could provide All-NBA caliber defense and play a much lesser on-ball role alongside Doncic. We know he’s on the market. The question is whether the Mavs could offer what the Bucks want, which is playmaking. Finney-Smith, maybe? The Mavs could lowball and try to coerce Milwaukee into moving on.

There could be a number of other stars on the market. Beal, if he wants out, is an attractive option. It’s tough to know if the Washington Wizards would be interested in a high draft pick, but the Warriors could offer the No. 2 overall pick. Chris Paul also appears to be available, though his contract certainly complicates things. Zach Lowe reported that there have been no CP3-to-Bucks rumblings, but that would be the ideal Paul fit.

While I have no reportage whatsoever, I’d keep an eye on players like Devin Booker, CJ McCollum, Russell Westbrook, and Blake Griffin, who all could be unexpectedly available one way or another. Booker likely won’t ask out right now, given how well the Suns played in the bubble, but the Booker-to-Minnesota suggestions won’t stop. (A Booker, D’Angelo Russell, Karl Anthony-Towns big three would get torched on defense.)

If the Portland Trail Blazers have a chance to upgrade on McCollum, they should do it. The Damian Lillard-McCollum pair seems to have run its course, and while it brings guaranteed playoff contention, the Blazers at some point have to aim higher. Is there a quality wing or big that would make the team better without McCollum? It’s not clear that there is such an option. I’d suggest Rudy Gobert, but McCollum overlaps with too much of the Utah Jazz’s existing talent.

Westbrook’s market won’t be particularly fruitful, but the Houston Rockets should explore it. The same goes for the Pistons and Blake Griffin, whose injury history obviously raises concerns. James Harden and Ben Simmons are probably the biggest names who have been discussed as trade candidates, but I wouldn’t bet on either of them moving.

We’ll likely see almost every team in discussions for some notable trade. Everyone wants to win. Players on varying tiers below stardom — Fred VanVleet, Danilo Gallinari, Jerami Grant, etc — could move. With no obvious juggernaut, this jockeying for position carries plenty of weight.