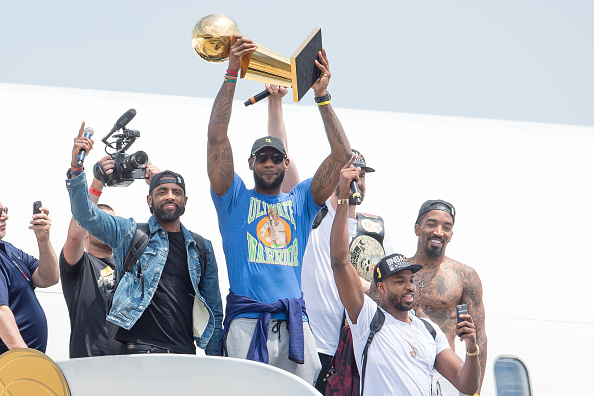 The Cleveland Cavaliers are now just a couple of days off of their first NBA title in the history of the franchise. Everything is great in The Land right now, where a parade for the ages will be held Wednesday in the city that has been thirsting for a championship for decades.

But at some point, the 2016-17 season is going to be among us, and the quest for a repeat will officially be on for the Cleveland Cavaliers. It’s usual for championship (and really any) teams to have a different makeup the following season, and the Cavs will certainly have different faces on the floor come next season.

Of course, the first question everybody wants the answer to is, “Will LeBron James leave?” The answer to that, for me, is no. There have been a handful of rumors swirling around the internet that LeBron might be interested in leaving, now that he’s brought a title to Cleveland and done what he said that he would do when he returned.

In my mind, that’s the only reason he needs to stay put. There’s no longer any pressure on him in Cleveland. He brought the city that couldn’t win a title—a title. He’s their native son, and can keep signing two-year deals with a player option on the second year, so he can continue to max his earnings. LeBron has a good situation where he’s at now, and he’s home. There’s really no reason for him to venture elsewhere—especially a loaded Western Conference–for now.

The second biggest question surrounds the future of Kevin Love. I’m a pretty firm believer that winning (and time) heals all wounds. Had the Cavaliers not won the championship and a rough relationship continued between LeBron and Love, my assumption would be that he’s out. But with the championship in hand, I find that to be less likely now. If you win a championship, you typically try to keep key pieces in place. Love hasn’t been considered a big piece over the course of this season, but he does have value. Worst case scenario—the Cavs just get rid of him later on.

But the rest of the roster is where things really get interesting. Aside from Kevin Love, Kyrie Irving, Tristan Thompson, Iman Shumpert, Channing Frye, and Sasha Kaun are the only players with contracts going into next season. Mo Williams has a player option, as does J.R. Smith. Williams won’t cost the Cavaliers but $2.2 million, no problem.

Smith, on the other hand, has certainly proved his worth, and will be costlier for the Cavaliers, who are already over the luxury tax for next season. LeBron is a big supporter of J.R. Smith, which was more evident than ever during his postgame presser after Game 7. The two get along great, and LeBron certainly will want Smith back. I would be surprised if he’s not there in Cleveland’s quest for a repeat.

Timofey Mozgov will be gone, as the team has implemented a small ball system of play with Tristan Thompson at center. James Jones could very well be back, as he’s now won his third ring with LeBron James, somebody who likes having him on the team for his veteran leadership. Not to mention, if you really need him in certain circumstances, he can give you decent minutes off the bench.

Matthew Dellavedova has earned himself a bigger payday, and has proven himself to be a good backup on both ends of the floor. He should also be back in a Cavaliers uniform come 2016-17.

As far as the draft goes, the Cavaliers likely won’t be making any noise, unless they get involved in trades (see: Kevin Love), which seems unlikely right now. However, free agency signings will be the greatest variable in their offseason. They’ll need to replace Richard Jefferson, and there’s an overall interesting crop of veteran free agents that the Cavaliers might add to their roster.

Joe Johnson was long rumored to become a Cavalier last season, but was kept away for financial reasons. Perhaps LeBron can get him to give the Cavaliers another scoring threat. Although a more immediate need might be in the post, with the assumed departure of Mozgov, in which case the Cavaliers could look at a David West, Amare Stoudemire, or Jordan Hill, if the three aforementioned players are willing to take less to win.

If the Cavaliers are able to make some good signings in free agency and keep key pieces in place, that will go a long way in another title run. One area where the Warriors certainly had an advantage over them was bench depth. While the Cavaliers don’t have much wiggle room, the idea of winning a championship could be enough to get legitimate veterans to take a pay cut.

It should be an interesting offseason in Cleveland, but not one that will destroy their position as favorites in the Eastern Conference. Not as long as No. 23 is still in town.