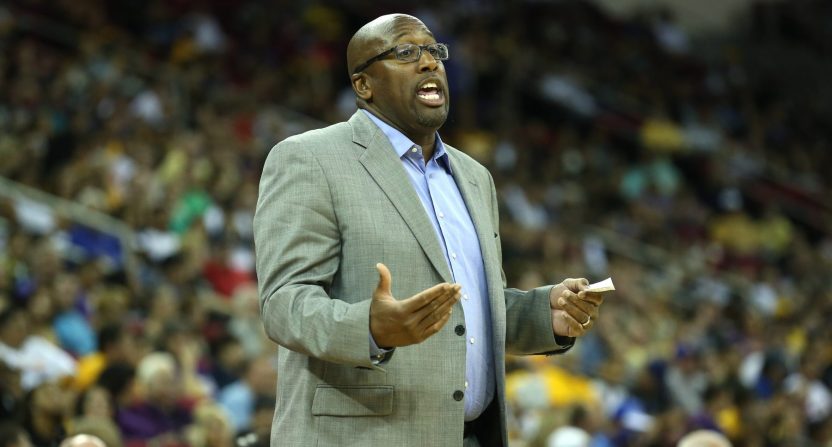 The last time we saw Mike Brown coaching a juggernaut NBA team with title expectations, the 2010 Cleveland Cavaliers were flaming out of the playoffs in the conference semifinals and everyone was blaming Brown for failing to have any sort of offensive game plan beyond “give it to LeBron.”

Now he’s an assistant coach for the Golden State Warriors, pressed into head coaching duties by Steve Kerr’s ongoing back pain. Last week, Kerr said it was possible he wouldn’t be back during the postseason, and on Monday Golden State stars Draymond Green and Steph Curry said the team is operating under the assumption Kerr is done for the year.

“The way we look at it is, plan on [Kerr] not coming back,” Draymond Green said after practice Monday. “That’s the way we’re approaching this thing.”

“The expectation is, until we hear otherwise, Coach Brown will continue to run the show,” Stephen Curry said, “with Coach Kerr being on speed-dial every single minute he can to give his input.”

So it looks like Brown will be in charge indefinitely. The question is, can the Warriors win the NBA title with him as coach?

On one hand, the Warriors haven’t lost yet with Brown calling the shots. And last season they opened a historic 39-4 with Kerr out and newbie Luke Walton as coach. Plus, we’ve seen less-than-incredible coaches win championships before, most recently when rookie Tyronn Lue captained the Cavs to last year’s title. Surely a seasoned Mike Brown is better equipped to coach late in the playoffs than Lue was. And Kerr is still pulling some strings behind the scenes, so his influence hasn’t disappeared entirely.

On the other hand, the Western Conference Finals could very well feature Mike Brown on one bench and Gregg Popovich on the other. Brown is a journeyman coach most notable, fairly or unfairly, for his team’s flameouts. Popovich is a five-time title-winning coach with an argument as the best coach of all-time. Last time those two matched up, Popovich’s Spurs swept Brown’s Cavaliers in the 2007 NBA Finals. Of course, Popovich had a much better team at the time, but that’s still a coaching matchup that should make any Warriors fan shudder.

In the end, the Warriors have the most talented team in the league, and with Kevin Durant back healthy they have a case as one of the most talented teams in history. If Riley Curry were their coach they still might be title favorites. But with Kerr healthy, their on-court advantage extends to the sideline. With Mike Brown in charge, well, we’ll see.