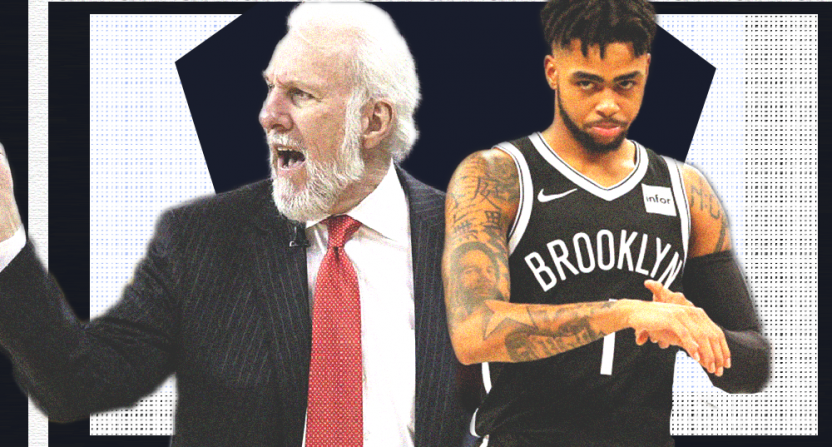 Bottom-seeded teams have the hardest road to a championship no matter what sport is being played. Seventh and eighth seeds are slotted against the best teams in their respective conferences and face an immediate uphill battle in order to succeed in the postseason. Usually, the top seed makes quick work of the weaker, lower seeded team. However, there have been some cases of lower seeds pulling off the upset, such as the eighth-seeded Philadephia 76ers beating Derrick Rose and the top-seeded Chicago Bulls in six games in 2012. In 2019, there are several teams in the NBA’s Eastern and Western Conferences that will likely be seeded in the lower half of the playoffs, but that could be formidable foes for top seeds in the first round.

The Clippers sold big time at the trade deadline despite having a winning record, moving the likes of Tobias Harris, Bob Marjanovic, Mike Scott, Avery Bradley, and Mike Muscala. In return, team president Lawrence Frank nabbed some future assets and a pair of good, previously underutilized young players in center Ivica Zubac and guard Larry Shamet to pair with talented rookie point guard Shai Gilgeous-Alexander.  Despite the trades, Los Angeles is playing their best basketball of the season. They have smartly built for the future while remaining competitive.

Zubac and Shamet have effortlessly fit into the starting lineup, as the club has rattled off nine wins in their last 10 games, including putting up 140 points against Boston and winning games against Oklahoma City and Indiana. While the Clippers have gotten solid production out of their starters, the team’s secret weapon is their bench. Guard Lou Williams is on his way to picking up his third Sixth Man of the Year Award, averaging more than 20 points off the bench. Meanwhile, power forward Montrezl Harrell has been a beast, averaging a career-best 16.5 points, 6.7 rebounds and 1.4 blocks per game. Both players can change the game with their energy and immediate impact. L.A’s bench averages a +13.3 point differential, the second highest mark in the NBA.

Doc Rivers has coached his ass off to turn into L.A. a surprisingly good team. The Clippers are relentless and unafraid. Even with no star players on the roster, L.A.’s mix of impact youngsters and vets makes them incredibly fun. They are peaking at the perfect time, and their ‘next man up’ mentality will make them a challenging out in the first round.

It is truly remarkable how the Nets have become a competitive team just a couple seasons after being in dire straits. General Manager Sean Marks has leveraged cap space and took second chances on discarded assets to build a formidable roster that has arrived much sooner than expected.

Led by point guard D’Angelo Russell, Brooklyn is a group of guys eager to prove they are legit. Russell has been stellar, hitting big shots for the Nets and being the team’s go-to scorer. In 73 games, he has averaged 20.7 points, 6.9 assists and 3.7 rebounds per game.

It is not just the Russell show, however. Sophomore center Jarrett Allen has stepped up and become one of the most fearless shot blockers in the league, who has an infectious non-stop motor. Shooting guard Joe Harris was picked off the scrap heap after flaming out with the Cavaliers in 2016. He has evolved into one of the best three-point marksmen in the league.

But what makes Brooklyn truly special is their bench. The Nets second unit has the NBA’s best bench point differential at +14.7 thanks to a variety of strong vets. Point guard Spencer Dinwiddie has become Lou Williams light, filling up the bucket to the tune of 17.4 points per game and hitting a variety of clutch shots. DeMarre Carroll, Ed Davis, and Shabazz Napier have all played above expectations and filled out a capable second unit.

The Nets are well-coached, packed with depth at every position, and have something to prove. It will be fascinating to see if they can translate their superb regular season success into a playoff run. Nobody thought they would be this good this quickly. They could catch a team sleeping and surprise in the playoffs. At the very least, they will make things difficult for their top-seeded opponent.

In late February, the Heat were down and out. After losing consecutive games to the Detroit Pistons and Phoenix Suns at home, Miami’s postseason chances were on the brink as the team slipped seven games under .500. Over the last month, the Heat have found their way, and they’re playing some great basketball to end of the year.

A lot has changed for Miami in the last month. The biggest impact is the return of All-Star Goran Dragic. The dynamic Slovenian point guard missed two months of action with knee surgery. Now, back in the lineup, his passing, pace of play, and three-point shooting have greatly improved the Heat. Coach Erik Spoelstra has experimented with different lineup combinations, but demoting center Hassan Whiteside in favor of Bam Adebayo was the right call.

There is no doubting Whiteside is a talented player, but his lack of engagement and attitude wore thin. Adebayo has given the Heat a big who can pass, is more efficient at the rim and does not need shots to be effective on the floor. Small forward Justice Winslow has excelled with the ball in his hands. Guard Josh Richardson is one of the most underrated players in the NBA. There is a lot to like from this team, and their record has a lot to do with the injuries they’ve battled all season.

Fully healthy, the Heat have been great in the second half with nine wins in their last 12 games, including wins against Golden State, Oklahoma City, and San Antonio. Spoelstra and Dwyane Wade have been here before and have won multiple championships. While this version of the Heat does not have a LeBron, they have shown they are one of the best teams in the East when healthy. If they can stay injury free, the Heat aren’t going to go down easy. They are much better than their eighth seed and nba odds indicates.

Gregg Popovich’s Spurs are set to qualify for the franchise’s 22nd consecutive playoff birth after a superb late second-half surge thwarted them into the eighth seed in the West. For the first time in more than two decades without one of Tim Duncan, Tony Parker, or Kawhi Leonard, San Antonio has excelled without a superstar, using a balanced lineup and playing fundamentally smart basketball to keep winning.

Even lacking a superstar, the Spurs’ well-oiled machine has kept going thanks to contributions across the roster. Shooting guard DeMar DeRozan has become the team’s best player averaging 21.4 points, 6.2 rebounds, and 6.2 assists. Meanwhile, power forward LaMarcus Aldridge has been great in a 1B role, averaging 21.3 points and 9.0 rebounds per game. Outside the big two, consistent scoring from Rudy Gay, Bryn Forbes, Marco Belinelli, Derrick White, David Bertans and Patty Mills have kept the Spurs competitive in a year where it looked like the wheels might finally come off.

Popovich teams excel in the playoffs when the game is tighter and more physical. His Spurs are built to do some noise. They turn the ball over just 12.0 times per game, the lowest rate in the league, and lead the NBA with a 39.6 three-point percentage. If DeRozan can shake his past playoff demons and Aldridge can build on his strong postseason last year, San Antonio and their deep rotation will give high seeds fits.