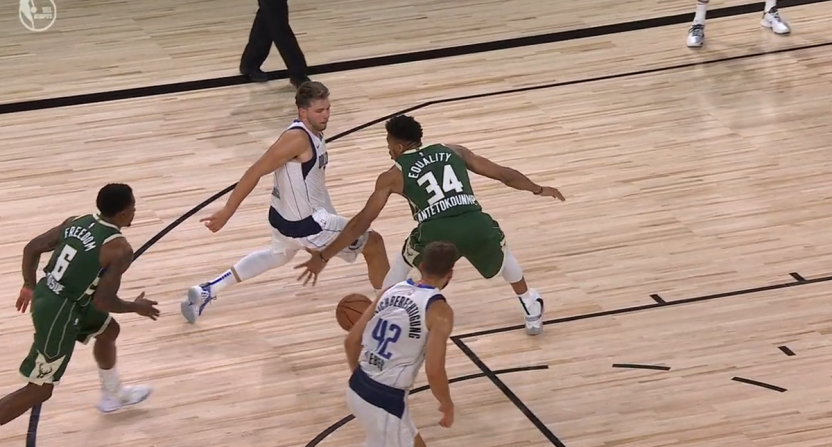 The Bucks and Mavericks played a very entertaining overtime game Saturday night on ESPN, with the Mavs overcoming a seven-point deficit with two minutes left in the fourth quarter to force overtime.

In the extra period, the Bucks took a five-point lead with two minutes left, only to see Dallas come back again, thanks to the heroics of Luka Doncic. Doncic put up a ridiculous triple-double line of 36 points, 19 assists, and 14 rebounds, outdueling Giannis Antetokounmpo despite the likely-MVP’s own 34 points.

The exclamation point came with Dallas leading by two with a little over a minute remaining. Doncic, working a pick-and-roll with Maxi Kleber, went to his left and then threaded an absolutely beautiful between-the-legs pass to Kleber for an and-1 dunk. It has to be seen:

That’s just absurdly smooth. Giannis is probably the best defensive player in the league, and he had absolutely no chance to stop either the pass or Kleber once he received it. Kleber made the free throw, putting the Mavs up five with about a minute left, and the Bucks never had the ball with a chance to tie again. (Doncic also nailed a clutch floater with 11 seconds remaining.)

The NBA bubble playoffs might end up being a weird event for a lot of people, but there’s no doubt that the West is going to be entertaining. The Mavericks are guaranteed a spot, and watching Luka go up against Kawhi and the Clippers (assuming that’s the 2-7 matchup) is going to be a ton of fun.