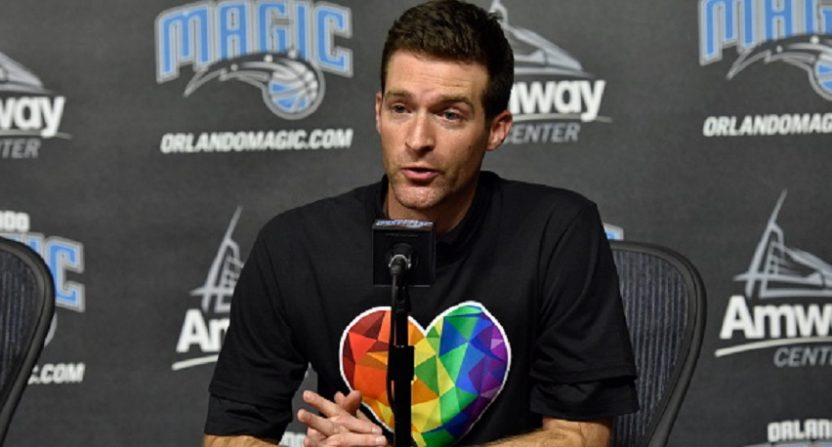 As expected, after another disappointing season, the Orlando Magic have fired general manager Rob Hennigan.

Poor trades, free agent signings, and draft picks prevented Orlando from ever taking the next step. In five years, Hennigan’s Magic failed to win more than 35 games in a single season.

Looking over the 35-year-old’s moves, it’s surprising he wasn’t fired earlier. Hennigan failed in virtually every facet of his job, squandering an opportunity other prospective GMs would have loved to work with.

The Magic have dismissed Rob Hennigan as General Manager.

Orlando had three top-five picks and four lottery picks in the last four seasons. You’d think that would yield a solid foundation, but Hennigan ended up with Andrew Nicholson, Victor Oladipo, Elfrid Payton, Aaron Gordon and Mario Hezonja. Only the latter three remain and none possess star impact. I’m higher on Payton than most, but Hezonja is a bust and Gordon still hasn’t figured out his role in the NBA. (Hennigan may have been ready to give up on him, as hinted at in a photo that was unfortunately tweeted out.)

Furthermore, it doesn’t help that Hennigan selected impact rookies Dario Saric (dealt away for Payton) and Domas Sabonis (traded in a package for Serge Ibaka) and then gave them up.

Ultimately, Hennigan made 11 selections during his time in Orlando and saw little-to-no return. Without a doubt, his biggest flaw was player evaluation. It’s unacceptable to miss on so many picks, especially for a team desperate for young talent.

Where do we begin?

Hennigan made some atrocious deals during his time in Orlando. His first deal in 2012 was trading sharpshooter Ryan Anderson for depth forward Gustavo Ayon. He also traded Saric in the Payton deal, gave away Moe Harkless to Portland, and dealt Tobias Harris for essentially nothing.

More recently, blinded by the pressure of competing, Hennigan dealt Victor Oladipo (one of his few good draft picks), Sabonis and Ersan Ilyasova for one season of Serge Ibaka. Subsequently, he dealt Ibaka to the Toronto Raptors for the inconsistent Terrence Ross.

Now, it’s important to mention Hennigan wasn’t totally incompetent on the trade market. He landed Nik Vucevic in the Dwight Howard deal. He also turned Aaron Afflalo into Evan Fournier. Both are impact players in Orlando. But the bad outweighs the good.

I’m mixed on Hennigan’s trade history. Far too often, he panicked and gave up too many assets for a specific need. But Vucevic and Fournier are legit NBA starters.

Hennigan’s penchant for signing mediocre players to multi-year deals didn’t totally mess up Orlando’s cap, but stopgaps didn’t help the Magic compete. For example, Ben Gordon for two seasons at $9 million wasn’t a killer. But why give him a deal after he shot 27 percent from deep in Charlotte?

Specifically, Hennigan’s undoing was this last offseason. $72 million to Bismack Biyombo when a starting center (and a glut of forwards) was already on the roster was a huge overpay. $29 million for backup point guard D.J. Augustin? Talk about outbidding yourself. Meanwhile, handing $15 million for one season of the perennially awful and unengaged Jeff Green is laughable. Hennigan knew the Magic needed to make the playoffs for him to keep his job and instead of making safe bets, he tried for a home run and ended up striking out.

Ultimately, Orlando never had the foundation to compete in the East. Four coaches, multiple bad draft picks and deals over five seasons did Hennigan no favors. He’s still young, so perhaps, he’ll learn from his mistakes with the Magic and take a more cautious approach with his next NBA job. But unquestionably, his time with Orlando was a disaster.