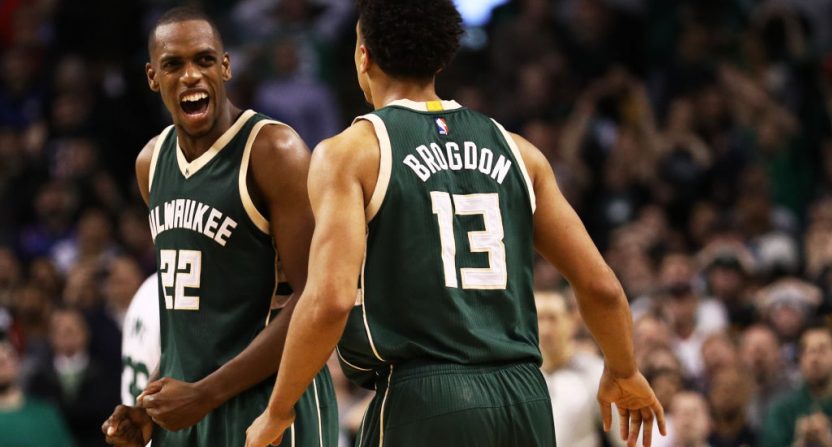 The Milwaukee Bucks are a team you can’t help but cheer for.

Coming off a 33-win season, Milwaukee wasn’t an obvious candidate to see significant improvement. Outside of the Greek Freak Giannis Antetokounmpo and Jabari Parker, the roster didn’t exactly scream “playoff team”. However, GM John Hammond worked hard to add to a promising core.

While Parker suffered a second ACL tear, most of those offseason moves have paid huge dividends for the Bucks.

Milwaukee has gone from a poor outside shooting team to ranking tied for eighth with a 37 percent long-range shooting percentage, up significantly from their rank of 22nd in 2015-16.

Unsurprisingly, the Greek Freak has continued his superstar trajectory, averaging a ridiculous 23.2 points, 8.7 rebounds, 5.4 assists, 1.9 blocks, and 1.7 steals per game this season. But outside Giannis, the Bucks’ future is looking even brighter than ever.

Maker’s stats don’t look pretty at first glance, especially since 3.9 points per game isn’t anything to write home about. However, his development this season is what should encourage Bucks fans. It’s a small sample, but Maker has shot 47 percent from the field and 40 percent from three. He’s got all of the potential in the world and is starting to tap into it.

At 20-years old, he’s only going to get better on here from out. If you don’t believe me, listen to what Kevin Garnett had to say about him.

"Kevin Garnett told me that Thon Maker will be the MVP of the league one day." –@RealVinBaker saying KG said that Vin can quote him on that

That’s not exactly faint praise. Maker has quite a way to go to become a consistently effective NBA player, but the tools are all there.

On the flip side, Brodgon’s production is possibly the most surprising in the entire 2016-17 rookie class. The 24-year-old is averaging 10.3 points, shooting 40 percent from deep and giving the Bucks tough two-way minutes at the guard position. Brogdon’s versatility and effort exemplify Milwaukee’s long-term goal.

Look, I’m not saying the Bucks will win the NBA Championship this year. That said, the NBA should be on notice. At 40-37, Milwaukee has arrived. From this point forward, they’re only going to get better as they develop together. They have an extraordinarily talented and intriguing young core. In three seasons, imagine where Giannis, Parker (if healthy), Brogdon, and Maker could be. In potential alone, that’s scary. Throw in Khris Middleton, who’s still only 25, and the future looks even brighter.

Hammond has done a masterful job tweaking a roster to turn the Bucks into something more than the Greek Freak Show. Milwaukee is putting all the pieces in place to stay relevant, and to top it off they’re damn fun to watch. What’s not to like?