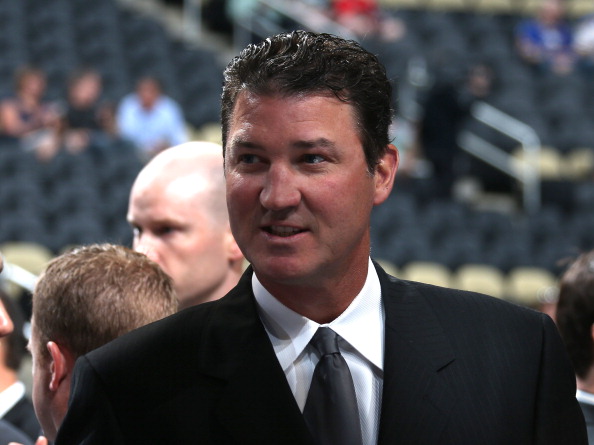 While The Last Dance largely focused on Michael Jordan, the 10-part documentary series was about the Chicago Bulls from the mid-80s throughout the 90s. Because of that, and because not too many people look fondly on it, it was probably for the best that The Last Dance didn’t end with Jordan’s two seasons with the Washington Wizards.

Jordan retired after the 1997-98 season but he was only away for three seasons before coming back to the Wizards for the 2001-02 season. MJ on the Wizards was… weird, but at the same time, Jordan retired from the Bulls at 35 and was still young enough to realistically play at a high level. Even after missing three seasons.

Based on reports at the time of Jordan’s return, Mario Lemieux allegedly had a hand in MJ’s comeback. So if you were against Jordan playing for the Wizards, the NHL legend might be partly to blame due to his similar return from retirement just one year earlier.

Jordan called not only to congratulate Lemieux, but to ask how much time and preparation Lemieux needed before returning to be nearly the same player he had been before retiring in 1997.

“Seeing me come back and the excitement, and me doing pretty well right off the bat, gave him the confidence to start training and now he’s back,” Lemieux said Tuesday. “I’m sure he’s ready to go and will be one of the best, if not the best again.”

While their reasons for retirement were different, Lemieux’s and Jordan’s careers went down similar paths. Lemieux underwent treatment for Hodgkin’s lymphoma and retired for the first time after the 1996-97 season at the age of 31. After getting into ownership with the Pittsburgh Penguins, Lemieux came out of retirement three years later and played for five more seasons as an owner-player.

Jordan followed suit a year after. He retired (for the second time) after the 1997-98 season and came back three years later after taking partial ownership of the Washington Wizards. Jordan was older and only played two seasons but both retired for good at age 40.

Lemieux speculated how Jordan’s career would go if things didn’t work out in Washington and he gave a realistic, matter-of-fact response that Jordan was coming back to have some fun, not to add to his legacy.

Lemieux doesn’t think Jordan’s career will be marred if the Washington Wizards don’t have a successful season, even though Jordan retired from the Chicago Bulls three years ago after winning three successive NBA titles and six overall.

“No, not at all,” Lemieux said. “The reason he’s coming back is he loves the game and wants to play and it’s not too late for him. With the team he has in Washington, his chances of winning a championship are pretty slim. But he wants to come back and play for a couple of years, and it’s his life.”

In all honestly, that’s what Jordan’s Wizards career was all about. They weren’t going to win a championship and Jordan was an owner of the team so why not go out there and have some fun with a young team and sell some tickets. And if you look at MJ’s stats, yeah he regressed a bit but he had decent stats being an older player on a rather young team compared to his prime with one of the greatest teams of all-time.

It’s tough to determine who was the better player in their respective sport but in terms of ownership, Lemieux has three Stanley Cup titles as an owner while Jordan’s teams have won one playoff series. Hopefully, “Super Mario” will give “His Airness” some tips on team ownership.