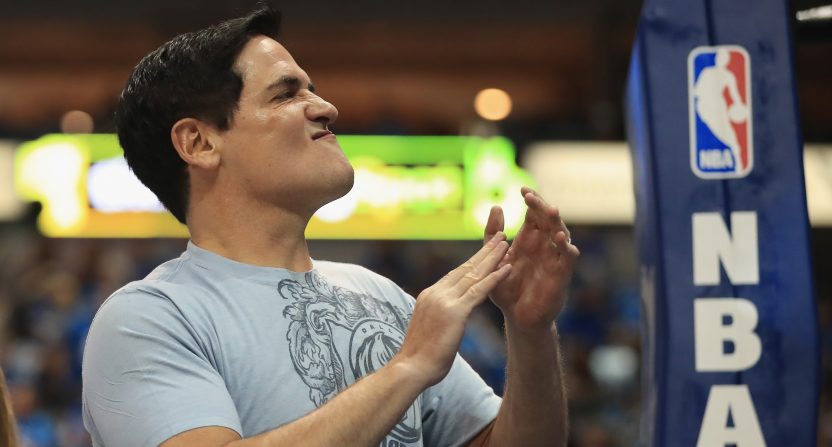 You technically didn’t need to watch the NBA Draft to know what was going on. For many, they were hovering on Twitter for the latest “Woj Bombs” from The Vertical’s Adrian Wojnarowski as he was able to reveal draft picks minutes before Adam Silver announced. Even to the point where many were fooled by various fake Woj accounts.

For Dallas Mavericks owner Mark Cuban, he left no stone unturned in making sure he wouldn’t get caught out by a Woj Bomb.

As Cuban and a staff member told Dallas News, Cuban told staffers he would fire the person who would leak a pick to Wojnarowski or really anyone else.

“I said, ‘OK, two things. One, when I’m on the phone, everybody shut up. Two, if this gets to Wojo before our pick, whoever we find out did it is fired.'”

“Mark said, ‘OK, we’re going to give Woj a pump fake,’ ” the staffer said. “Then he said, ‘No one touches their phones or they’re fired.’ Coming from The Boss, you take it seriously.”

Cuban stuck to his guns and Wojnarowski wasn’t able to scoop the ninth pick in the draft. The Mavs got their man in Dennis Smith Jr. and once they knew they were getting him, the entire room exploded in “thunderous applause” according to head coach Rick Carlisle.

As someone in the media, I would be a bit upset that a team isn’t playing ball to let people know ahead of time who they are selecting. But if I’m in Cuban’s shoes, I would no doubt do the exact same thing and am puzzled why nobody else lays down the law like this for leaks that could potentially hurt the team.

Now there are reasons as to why a team would leak their pick to someone trusted in the media like Adrian Wojnarowski. Sometimes teams leak potential moves to the media when it’s beneficial to them. Whether its to tease that multiple teams are interested in a trade to start a bidding war or to maybe lower the value of a potential free agent to get him on the cheap, sometimes teams will share their info knowing it will get out.

And in the NBA Draft, there isn’t much harm in revealing your pick a few minutes before it’s announced because it’s not a big deal for you if you give the team behind you an extra few minutes to choose.

But sometimes, it’s best to set a precedent to your staff that a sports team is a business and a business wouldn’t dare reveal their secrets because that might cost them money. Whether it’s tipping their draft pick or tipping what kind of coffee is in the Mavs’ war room, Cuban didn’t want anything leaked and succeeded in doing that.