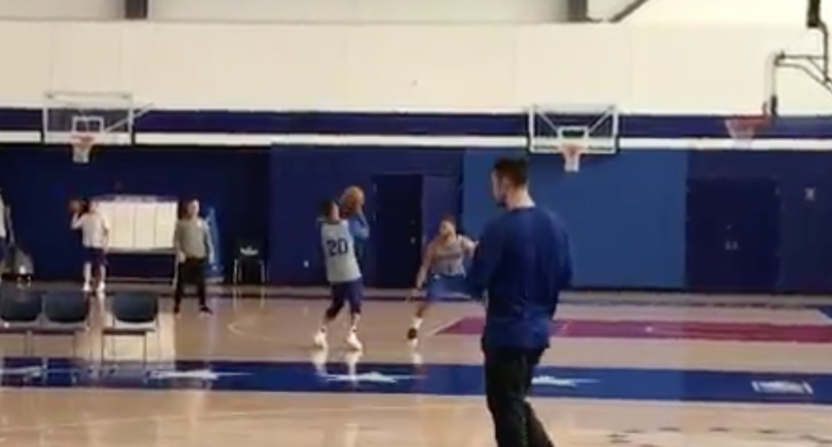 Back on October 25, the Philadelphia 76ers announced that Markelle Fultz would miss several games with a nagging shoulder injury. Days later, the team declared that he was out indefinitely. Nearly three months later, the point guard remains sidelined and has seemingly failed to fix the shooting woes that sparked his absence in the first place.

On Sunday, video trickled out of Sixers practice of Fultz hoisting some shots, and the images were ugly. Via Sixers reporters Derek Bodner and Kyle Neubeck, here are some clips:

Markelle Fultz’s shooting has trended closest to looking like this today. Take that for what you will. #Sixers pic.twitter.com/Hdi82KT7UW

Although other videos of Fultz’s shooting appear slightly less dire than those ones, it’s startling to see a guy who hit 41.3 percent of his 3-pointers in college and was selected No. 1 overall in the NBA Draft shooting like a nine-year-old playing his first season of rec league. Either Fultz’s shoulder is still giving him a lot of trouble or the shooting issues are in his head. Either way, the guard seems unlikely to get that shot off over NBA defenders.

Sixers coach Brett Brown told reporters Sunday that Fultz’s shoulder was getting better but that the chief determinant of when the point guard returns will be his ability to shoot.

Brown on Fultz's shoulder:
"I don't know if we could say it's 100%, the doctors could say that better than me, but it certainly is getting better."

Brown: "I think what he needs to be is able to shoot a basketball."

All of this might be no big deal if Fultz had been, say, the No. 20 overall pick. But being taken first overall comes with expectations, and long-suffering Sixers fans are anxious for him to meet them. Making matters worse, the pick Philly traded to move up for Fultz turned into Jayson Tatum, who has emerged as a star for the Boston Celtics.

It’s important to remember that Fultz remains only 19 years old and presumably has plenty of career ahead of him. He could lose this entire season and still fulfill the All-Star potential most observers saw in him before the draft. But before that happens, he will need to remember how to shoot.