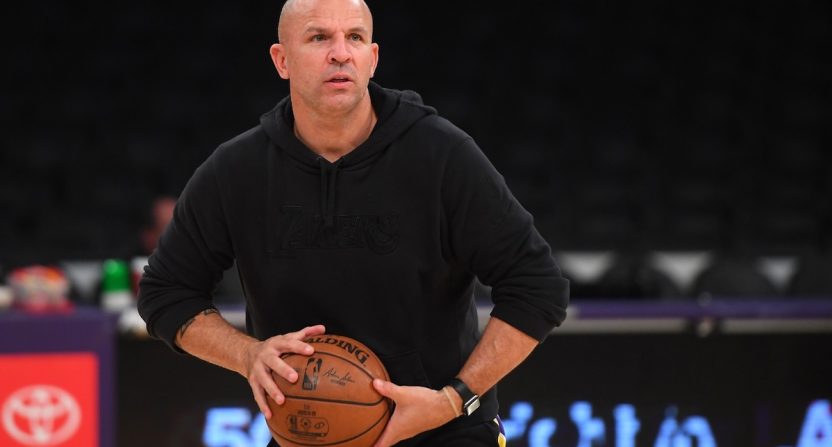 Did Rick Carlisle already know that Jason Kidd would be his successor as head coach of the Dallas Mavericks?

ESPN’s Tim McMahon, The Athletic’s Shams Charania, and the Dallas Morning News‘ Brad Townsend have each reported that the Mavs have hired Kidd to be their next coach. The 19-year NBA veteran and head coach has been an assistant on Frank Vogel’s staff with the Los Angeles Lakers for the past two seasons.

As rumors of Dallas’ interest in Kidd developed, Mavericks fans on social media questioned the possibility of him taking over as coach, citing his unsuccessful tenures with the Nets and Milwaukee Bucks.

In Kidd’s lone season coaching Brooklyn, he compiled a 44-38 regular-season record and the Nets lost in the second round of the playoffs. The following season, in a bizarre circumstance, Kidd was traded to the Bucks for two second-round draft picks. The Nets were willing to let Kidd go after he made a failed power-play for heading the team’s basketball operations. The Bucks only finished with a winning record once in his four seasons and that was with a 42-40 mark in 2016-17. He was fired midway through the following season.

Luka Doncic is a strong supporter of Mavs assistant coach Jamahl Mosley. “He’s got the things that are needed for a head coach," Doncic said after Mosely's one-game fill-in for a win over the Knicks this season. "He can be the head coach, for sure.”

Many observers also question hiring Kidd over assistant Jamahl Mosley, who’s been on Carlisle’s staff for the past six seasons, an NBA assistant for more than 10 years, viewed as deserving of a head-coaching job, and has the support of Mavs star Luka Doncic.

But according to ESPN, Kidd has support from former teammate Dirk Nowitzki, now a special advisor with the Mavericks. Those endorsing Kidd apparently believe that he would work well with Doncic, something that’s been a concern as tensions reportedly heightened between the third-year guard and analytics executive Haralabos Voulgaris, in addition to Carlisle. Doncic can be a free agent after the 2021-22 season, so there’s definitely some urgency in making him happy.

Rick Carlisle on his Mavs: "It's hard to put an exact finger on it. It’s just a feeling that I had that it would be mutually beneficial. My hope is that Jason Kidd will be the next coach of the Mavs because he and Luka have so many things in common as players."

Interestingly, Carlisle endorsed hiring Kidd shortly after stepping down as head coach. Considering he was moving on — and has since been hired by the Indiana Pacers — Carlisle expressing so much praise for Kidd was a bizarre scenario.

But Carlisle has often been unusual. When he was fired by the Detroit Pistons in 2003, he appeared alongside general manager Joe Dumars to talk to the press about the decision.

Hiring Kidd brings back a popular player who was with the Mavericks for two different stints. Dallas drafted the point guard No. 2 overall in 1994 and Kidd played three seasons before getting traded to the Phoenix Suns. The Mavs re-acquired him in a 2008 trade with the New Jersey Nets, hoping he would be a veteran floor leader for a championship contender. That move eventually paid off with Kidd helping Dallas to the 2011 NBA title.

In addition to Kidd, the Mavericks are also hiring Nico Harrison as their new general manager, replacing the fired Donnie Nelson. He will also head the team’s basketball operations. At first glance, Harrison appears to be an unusual hire, having been an executive with Nike for the past 20 years.

But in his position overseeing Nike Basketball and the Jordan Brand marketing, Harrison has developed strong relationships with NBA players, notably Kobe Bryant. That made him an appealing candidate among NBA teams for front-office positions in recent years. Harrison reportedly has a good bond with Doncic, playing a key role in the Mavs’ star moving from Nike to the Jordan Brand in 2019.

Any concerns over Harrison dealing with personnel should be calmed by Michael Finley remaining as the team’s vice president of basketball operations. Many thought Finley could be promoted to general manager and overseen basketball ops, and he’s drawn interest from other teams for GM positions, but he’s apparently content to work alongside Harrison. Reportedly, the Mavs thought it was important to add an outside perspective to the front office.