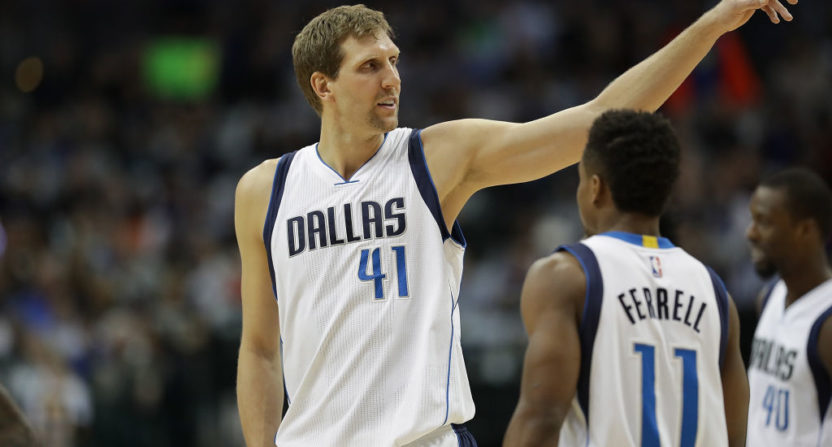 Dirk Nowitzki just celebrated his 39th birthday. He is one of two players left in the NBA from the 1998 NBA Draft (Vince Carter is the other). And still he seems to have no intention of retiring.

ESPN’s Marc Stein reported Sunday that the Dallas Mavericks will decline Nowitzki’s $25 million option for next season with the intention of signing him to a new multi-year contract.

League sources say Dallas has informed Dirk Nowitzki that it will decline his $25 million option for next season to sign him to a new deal.

Many observers had assumed Nowitzki would retire when his contract ended after next season, but this news suggests the future Hall of Famer has multiple years left in him.

Dirk certainly isn’t the superstar he used to be. In 2016-17 he posted his worst season since his rookie year, scoring 14.4 points in 26.4 minutes per game, while shooting 43.7 percent from the field and 37.8 percent from the 3-point line. His production was somewhat sapped by an achilles injury that limited him to 54 games.

Still, Nowitzki is a useful player and, more importantly, the longtime face of the Mavericks’ franchise. He’s Dallas’ all-time leader in—deep breath—points, rebounds, assists, steals, game played, minutes played, field goals made and attempted, 3-pointers made and attempted and free throws made and attempted. And apparently he’ll have a few more years to add to all those totals. He’s only 38 blocks behind Shawn Bradley for the franchise record, so maybe that’s something to shoot for?

Sometimes it feels like Dirk is underrated from a historical perspective. The guy in sixth in NBA history in points scored and could still pass Wilt Chamberlain and maybe Michael Jordan if he stays relatively healthy over the next two or three years. He’s got a league MVP award, an NBA title and a Finals MVP as well. He’s almost certainly one of the 20 best players in NBA history, whether or not you realize it.

In the past, Dirk’s presence on the Mavericks has complicated their decision of whether to rebuild or compete for a playoff spot, but at this point that choice is easy. Nowitzki has said he’s fine if the Mavs want to break down their roster, and he’s no longer good enough to keep the team competitive by himself. Dallas will probably be pretty bad over the next couple of years, but at least it looks like they’ll still have Dirk around to hit some fadeaway jumpers and remind us how great a career he has had.