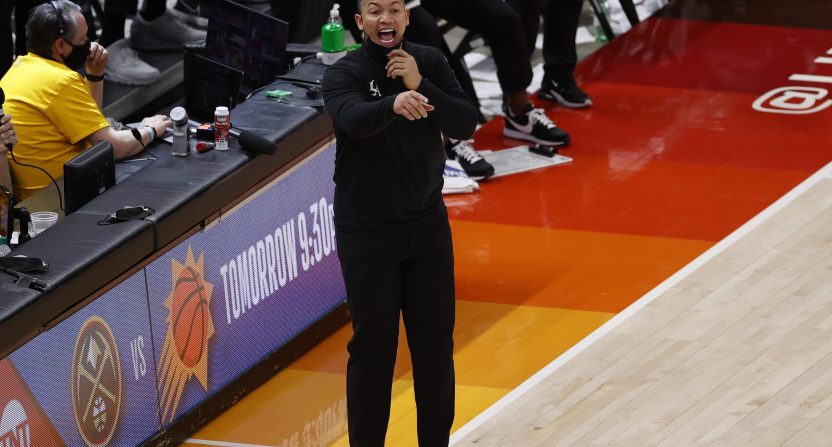 A lot of us owe Ty Lue an apology. He is Coach Mission: Impossible. Peril lurks around every corner and yet when the situation looks most dire, he escapes victorious. How else do you explain what he has accomplished over a relatively short career?

Once perceived as just a guy who was fortunate enough to win an NBA championship because he had LeBron James, we now are forced to re-evaluate everything we thought we knew about him. The L.A. Clippers are in the Western Conference Finals for the first time in franchise history in Lue’s first season. Considering the circumstances (No Kawhi Leonard? No problem!), that’s a miracle, and Lue deserves all the credit.

Lue has done things that the NBA head coach Mount Rushmore of Phil Jackson, Red Auerbach, Pat Riley and Gregg Popovich has never done. The Clippers are the first team in league history to erase multiple 0-2 series deficits in the same postseason. They rallied from 25 down at Utah to win Game 7, becoming the only team to overcome a 20-point deficit in a series-clincher.

Call it a fluke if you want but this does not seem to be an isolated incident. Lue’s teams have been historically resilient. Lue does his best work when facing the longest odds. He coached the Cleveland Cavaliers to the greatest series comeback ever when they came back from a 3-1 deficit to stun the seemingly unbeatable Golden State Warriors in the 2016 NBA Finals.

So, should we be surprised if his Clippers reach these NBA Finals? Regardless, Lue has proven himself to be the right guy for L.A. He has enjoyed more playoff success with the Clippers in one postseason than his predecessor Doc Rivers did in seven.

The NBA is a results-based business and Lue keeps showing us that he’s good at his job. He’s not David Blatt, a guy who also rode LeBron’s coattails to an NBA Finals appearance in his first season but was fired midseason the following year. Blatt never got another job in the NBA.

Lue went to three straight NBA Finals with LeBron. When LeBron left for the L.A. Lakers in 2018, there was little talent left and Lue was a convenient fall guy. He got the quick hook, fired after the Cavaliers opened 0-6. Surprisingly, Lue took a humble route to redemption and joined Doc Rivers’ Clippers staff for 2019-20.

This rarely happens in sports. A championship coach isn’t supposed to be a subordinate.

Opportunity opened up for Lue when Rivers was fired after last season’s second-round flameout against the Denver Nuggets when the Clippers blew a 3-1 lead. Here it was. A second chance on a team with championship aspirations. We would finally get to see how good of a coach Lue really is. Well, we have found out. Just not in the way we expected.

Still, the Clippers have played their best basketball in the playoffs. After an 0-2 first-round hole to Dallas, they rebounded and blew out the Mavericks in Game 7.

What really made us take notice though was what the Clippers did to the Utah Jazz. Things couldn’t have looked bleaker. They lost the first two games in Utah and even though they crushed the Jazz in Game 3, they lost Leonard (knee injury). This postseason, Leonard has the highest player efficiency rating (30.6) of anyone who has appeared in at least five games.

Most teams couldn’t survive an injury like that. But Lue has all the confidence in the world. His only postseason series losses have come in the NBA Finals (to the super-sized Golden State Warriors with Kevin Durant).

Coaching adjustments can sometimes be hard to quantify. What was clear: Lue and his staff neutralized Utah’s Defensive Player of the Year Rudy Gobert by playing small ball and putting five shooters on the court.

When Gobert was on the floor, the Clippers increased their 3-point shot attempts. This was particularly obvious when Gobert stayed in the paint rather than come out to challenge shooters. In Game 7, L.A., the best 3-point shooting team in the league this season, went 20 of 39 from 3-point range.

Sure, it helped that second-year forward Terance Mann enjoyed the game of his life (39 points, 7 of 10 from 3-points range). But the Clippers needed a solid gameplan, especially without Leonard. That speaks well of Lue.

Now Lue is facing a new challenge. The Suns were the only team to sweep their opponent in the semifinals and Devin Booker has looked sensational. The Clippers have not officially ruled out Leonard for the playoffs. They’re calling it a knee sprain, it however seems unlikely he’ll be back. The Suns are also missing an All-Star with Chris Paul sidelined for the immediate future due to COVID-19 protocols.

The Clippers lost Game 1 in Phoenix but even if they fall behind 0-2, you can’t count them out. Not with Lue on the sidelines.

Lue is more than just a guy. He might be an exceptional coach.