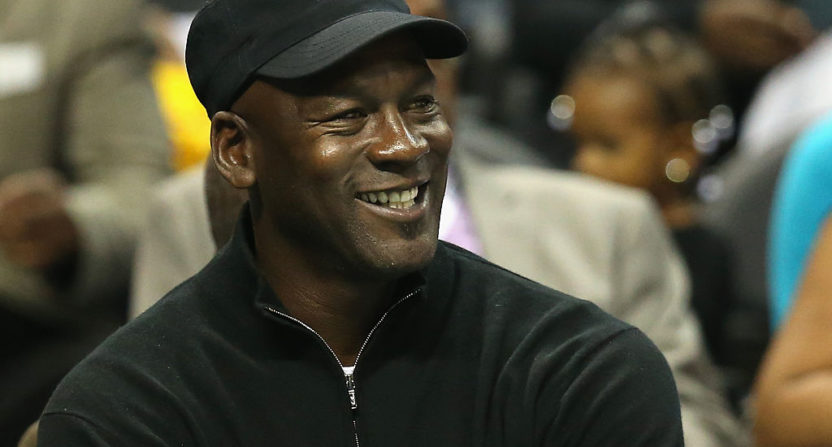 Michael Jordan doesn’t usually come out and says what he thinks.

The Hall of Fame basketball player and extremely successful businessman is essentially the anti-LaVar Ball in just about ever way. Jordan is an actual talented basketball player, actually has a successful shoe line and let’s that do the talking rather than going on the debate shows and speaking to anyone within earshot, to embarrass himself on a seemingly daily basis.

Anyway, months ago, LaVar made a comment about how he’d beat MJ one-on-one. Yes, anyone with half a brain would know that there’s no way that’s happening and when everyone wanted to know what Jordan thought, MJ acted as though it wasn’t worth his time.

That was until he hosted the Michael Jordan Flight School and was asked about LaVar by a kid. If someone in the media asked the same thing, I’m sure Jordan wouldn’t answer the question but you can’t really do that to a kid. Instead, Jordan gave a rather thoughtful and nuanced answer that got to the heart of the issue and got cheered by the kids and adults in the gym.

“I was waiting for this question, I figured I would get this question. What is my take on LaVar Ball and his kids? Every parent is very proud of their kids, I don’t discourage that. I think [Lonzo] is really good, I think he has the potential to be a good player. His father is very proud of him, of all his kids I would assume. Like any father would be proud of his kids. But I would assume that, or I would say if I had a sit down to talk to him right now, if he was here. I’d tell him to shut up and let the kid play.”

Jordan probably felt good about the cheering and tested the audience and when asked about it, MJ took a little dig at the one-on-one comment.

“You’ve got to understand the source. He played, I think college maybe? He averaged, what, 2.2 points a game? For real? It doesn’t dignify an answer, but I’ll give you one, because you asked a question, I don’t think he could beat me if I was one-legged.”

Jordan is completely right. LaVar Ball has different sides to him. On one side, he is a father who is proud of his kids and wants them to be as successful as they can be to not only prosper professionally but financially as well. Like many, I don’t necessarily agree with how he does it but LaVar seems to be doing that because he’s trying to be a good father.

I will say, given the kids cheered when MJ took down LaVar Ball like that, gives me a little bit of hope for the future generation.